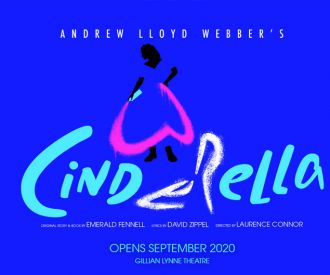 Tickets for Cinderella The Musical

This autumn, Andrew Lloyd Webber’s sparkling new production of Cinderella is coming to the West End’s Gillian Lynne Theatre! Boasting an award-winning creative team and star-studded cast, Cinderella the Musical is undoubtedly one of the most exciting things to happen in the musical world this year...

Cinderella features a sensational musical score by Andrew Lloyd Webber, lyrics by the Oscar-nominated David Zippel (The City of Angels, Hercules, The Woman In White) as well as a script from critically acclaimed screenwriter Emerald Fennell (Killing Eve and Call the Midwife). Starring as the titular character is Carrie Hope Fletcher (Les Miserables) alongside Victoria Hamilton-Barritt. Grab your tickets now to experience the beloved fairytale transformed into a breathtaking musical production!

Ticket prices for Cinderella start at £30 and are as expensive as £162 depending on where you choose to sit in the theatre. If you are looking for the best seats in the house, then these can be found in the middle of the Stalls section of the Gillian Lynne Theatre, close to the front and directly opposite the stage. There are also some excellent seats at the front of the Circle where you can enjoy incredible views of the stage.

If you are looking for more reasonable tickets, then there are discounted tickets in the Circle or to the sides of the theatre, which do have some slightly restricted viewing. However, generally seating in the Gillian Lynne theatre provides consistently excellent views.

There are currently no group tickets available for this show.

If you have any access enquiries or need to make booking please call 0844 412 48 (calls cost 7p/pm)or email access@seetickets.com prior to your visit. Please tell the theatre of any access requirements before your visit.

There is step-free access to the Gillian Theatre’s main entrance, which is located on Dury Lane. However, there is also an alternative, more accessible entrance for patrons using a lift inside the Stage Door on Parker Mews. Using this entrance, you can access the Stalls and there is a steep ramp over 2 steps to the lift entrance. From here, you can access the wheelchair spaces which are located at the back of the auditorium. Staff are happy to help any access customers with this entrance but please let them know on arrival.

There is an at-seat service available for access patrons and staff are happy to help in any way they can.

Transfers are available but you must bring one companion with you. There is a maximum of 2 wheelchair and 1 scooter transfers available.

How long is Cinderella the Musical?

What songs are in Cinderella the Musical?

Carrie Hope Fletcher stars as Cinderella and Victoria Hamilton-Barritt as the stepmother and the rest of the cast is yet to be announced.

What is Cinderella the Musical about?

Based on the famous fairytale, Cinderella follows the story of a young woman who is forced to live a life of servitude because of her evil stepmother. One night, she is granted a wish by a fairy godmother and attends a ball, where she meets prince charming…

Who wrote Cinderella the Musical?

Andrew Lloyd Webber wrote Cinderella the Musical and lyrics are by David Zippel.

Where is Cinderella the Musical showing in London?

Cinderella the Musical is showing at the Gillian Lynne Theatre.

When did Andrew Lloyd Webber’s Cinderella the Musical first premiere?

Andrew Lloyd Webber’s Cinderella the Musical is expected to premiere on London’s West End in 2019.

Who is starring in Andrew Lloyd Webber’s 2020/2021 version of Cinderella the Musical?

What is the recommended age for Cinderella the Musical?

Cinderella the Musical has a recommended age of 3+

Photos of Cinderella The Musical

Ticket prices for Cinderella The Musical