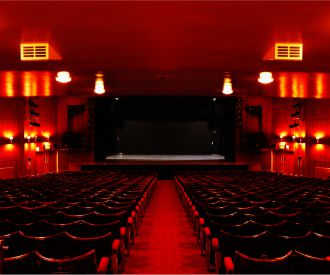 As the largest and one of the most important theatre venues in Devon, The Princess Theatre Torquay offers an impressive variety of entertainment including operas, ballets, comedy, concerts, musicals, pantomime and large-scale touring shows. For example, the Princess Theatre Torquay has hosted shows such as Chicago, The Blues Brothers, Joseph and the Amazing Technicolor Dreamcoat, Boogie Nights, Grease, Starlight Express, Sunny Afternoon, Little and Large, Jim Davidson and Get Some In.

The Circle: as the second tier of the theatre, the Circle is smaller with a capacity of 420 seats. The Circle still offers excellent seats and particularly in the front- centre. There are slightly cheaper tickets at the front and rear of the Circle but these seats still offer excellent views.

*Calls cost 7p per minute, as well as your phone company's access charge.

Train: the closest train station to the Princess Theatre is about a 14 minute walk away.

Car: with regards to the Princes Theatre Torquay parking, you can park on the road close to the venue. There is also parking available in car parks Shedden Hill, Marina and Fleet Walk.

If you have any access enquiries or requests, please call the Princess Theatre access line on 0844 871 3023 (calls cost 7p/pm) or email access4all.princesstorquay@livenation.co.uk. Please book any requirements in advance because there is not always guaranteed availability. There are also access tickets available for patrons so please call the theatre beforehand to ask about these.

Getting into the theatre

The main entrance to the Princess Theatre is on Torbay Road and has 6 steps up to the main foyer. You can also use the ramp to the far right of the entrance which allows level access to the back of the Stalls. There is a drop-off point just outside of the theatre and access to parking spaces nearby.

There is a customer lift inside the theatre which can be used to access all sections of the auditorium. The most accessible section of the theatre is the Stalls, which can be accessed by the alternative entrance to the far right of the main entrance. There are five wheelchair spaces in the Stalls and also transfers are possible. However, please let the theatre know beforehand if you want to do a transfer and also bring a companion with you.

The Circle is 22 steps up from the main foyer but this section of the theatre can also be accessed using the customer lift. There are handrails throughout the theatre and all steps are highlighted.

Staff are happy to help throughout your visit and navigate the theatre. There is also an at-seat service available for customers with limited mobility. If you require these services, please let a member of staff know beforehand. Unfortunately, there is no cloakroom in the Princess Theatre so customers have to keep wheelchairs with them throughout the performance.

The Princess Theatre Torquay first opened its doors to the public on Wednesday 7th June 1961. On the opening night, Tommy Cooper and Morecambe & Wise performed on the stage. It was originally built by the Torbay Council as a main part of the redevelopment of the Princess Gardens area on Torquay seafront. Since then, the theatre’s management has changed hands many times whilst it has always been under the maintenance of the council. The Princess Theatre was leased to the Apollo Leisure but it was then taken over by SFX and Clear Channel Entertainment. It was bought by ATG in 2009 who have managed the theatre up until now. Traditionally a seaside resort theatre hosting light entertainment and a variety of family shows. However, since 2002 the theatre has been hosting larger scales shows and touring musicals, making it a popular venue for both the holidaymakers and locals alike.

In 1963, the Princess Theatre famously welcomed the Beatles live on stage and they sang their recently released single “She Loves You” which was an extremely big and popular event. The Princess Theatre has also welcomed iconic figures such as Elaine Page, Joan Collins and Joan Rivers.