Warning: Invalid argument supplied for foreach() in /furanet/sites/best-tickets.co.uk/web/htdocs/app/_i18n.php on line 287
 Tickets for Wicked in London | Apollo Victoria Theatre
Find the best price on Best-tickets.co.uk
Compare prices between 40 official ticket vendors and five resale platforms (where prices may be higher or lower than the price on the ticket). 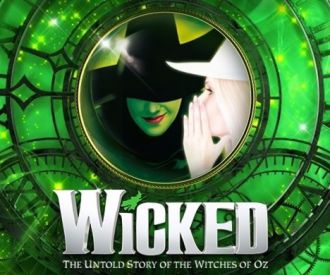 There’s much more to the story of Oz than they ever told you! Find out all about it! Based on the novel by Gregory Maguire, Wicked is a spectacular and magical London musical production which tells the story of the Good Witch and the Wicked Witch of the West, who overcome their difficulties to forge a profound friendship. Wicked follows a journey through the wonderful world of Oz like you’d never imagined it.

Based on the novel by Gregory Maguire, “Wicked: The Life and Times of the Wicked Witch of the West”, Wicked is first and foremost a musical about the friendship between two very different women. It is an ode to the struggle to beat the odds, in a bewitched and spectacular setting where everything is not always as it seems.

It is the story of Glinda and Elphaba, two students of magic who meet during their training. Glinda is popular, ambitious and beautiful. Elphaba, on the other hand, is extremely intelligent and passionate. The green skin she was born with however, has always been a bit of a turn-off for everybody else...

The musical is the memory of the years they spent growing up together, their encounter with the Wizard of Oz, and of how over the years, the paths of the two witches were painfully torn asunder. Don’t miss it!

How can I get there?

The theatre is located in Wilton Road, just opposite the London Victoria Mainline and Underground Stations. The main entrance and box office are on Wilton Road. (Postcode SW1V 1LG). It is easy to get to the theatre by public transport.

The theatre is deeply committed to ensuring that all kinds of audiences may access and enjoy the theatre. That is why the theatre’s management has adapted it and why they wish to make all necessary services available to theatre goers. There is a wheelchair ramp at the entrance to the lobby, and adapted toilets. Please make your presence known when you arrive so that our staff may attend to your every need. The platform lifts are 29" (74cm) wide x 33.5” (85cm) long. Four seats are reserved for wheelchairs in the circle. Seats have also been set aside in Row F for theatre goers who can move from their wheelchairs to a traditional seat. It is recommended that such individuals arrive at the theatre some 30 to 45minutes before the show commences.

A number of accessible performances are scheduled in advance throughout the year. The dates for 2019 are:

Availability is very limited. The theatre also has a guide for individuals who fall within the autism spectrum or who have difficulty communicating, to ensure that their visit is a satisfactory and simple experience. For more information on accessibility, please contact the theatre.

The theatre has 2,328 seats from which to enjoy the show.

Throughout 2019, there will be performances from Monday to Saturday at 7:30 PM. There are matinees on Wednesdays and Saturdays at 2:30 PM.

The cast features Alice Fearn as Elphaba, Sophie Evans as Glinda, David Witts as Fiyero, Melanie La Barrie as Madame Morrible, Andy Hockley as The Wizard of Oz, Chris Jarman as Doctor Dillamond, Jack Lansbury as Boq, Rosa O'Reilly as Nessarose; Laura Pick is the standby for Elphaba while Carina Gillespie and Maria Coyne are standbys for Glinda. There is also a full company of extras and top-class dancers.

How long is Wicked the Musical?

Wicked the Musical has a running time of 2 hours 45 minutes, with a 15 minute interval.

Is Wicked the Musical going on a UK tour?

No, Wicked the Musical is not on tour at the moment and will not visit the cities of Birmingham, Bristol, Leeds, Liverpool or Manchester.

Who is in Wicked the Musical London cast?

What songs are in Wicked the Musical?

The main songs in Wicked the Musical are “No One Mourns the Wicked”, “Dear Old Shiz”, “the Wizard and I”, “What is this Feeling”, “Something Bad”, “Dancing Through Life”, “Popular”, “I’m Not That Girl”, “One Short Day”, “A Sentimental Man”, “Defying Gravity.”

What famous quotes are from Wicked the Musical?

“Unlimited. My future is unlimited“ Defying Gravity, Elphaba “Everyone deserves the chance to fly“ , from Defying Gravity Elphaba “Don't be offended by my frank analysis, Think of it as personality dialysis.“ Glinda, Popular “Those who don't try Never look foolish“ from Dancing Through Life, Fiyero “No good deed goes unpunished“, from the song ‘No Good Deed’ “You've got me seeing through different eyes“ Fiyero, ‘As Long As You’re Mine’

Where is Wicked the Musical playing in London?

Wicked the Musical is playing at the Apollo Victoria Theatre London.

Who wrote Wicked the Musical?

Wicked the Musical was written by Stephen Schwartz and Winnie Holzman.

What book is Wicked the Musical based on?

Wicked the Musical is based on Gregory Maguire’s novel Wicked: The Life and Times of the Wicked Witch of the West.

When did Wicked the Musical first premiere?

Wicked the Musical first premiered on Broadway at the Gershwin Theatre in 2003.

Usuario Taquilla
Excellent This is one of the best musicals I\'ve ever seen! Not only is the musical score incredible, but I love the story-line and its unique twist on the Wizard of Oz. I\'ve downloaded the soundtrack afterwards and I have been listening to it ever since!