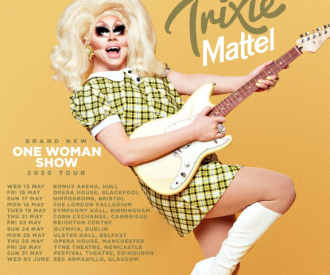 Featuring surrealist comedy, energetic dance routines and many much-loved songs from her albums with a 4 piece band, Trixie Mattel: Grown Up is expected to be in high demand so buy your tickets now for a theatre near you!

Who is Trixie Matel?

Originally from MIlwaukee in Wisconsin, Matell’s meteoric rise to stardom started with her incredible win on RuPaul’s Drag Race All Stars followed by coming sixth on the seventh season. Since then, she has co-hosted the web series UNHhhh and its viceland follow-up The Trixie and Katya Show with Katya Zamoldchikova and also released three albums Two Birds (2017), One Stone (2018) and a third album, Barbara (2020).

How much are tickets for Trixie Mattel?

Tickets for Trixie Mattel are currently priced at £24.50 at the Manchester Opera House and the Bristol Hippodrome Theatre for the January 2020 sessions but could be subject to change.

Trixie Mattel: One Night Only

TRIXIE MATTEL SPILLS THE REAL TEA ON DRAG RACE! GET READY WITH US