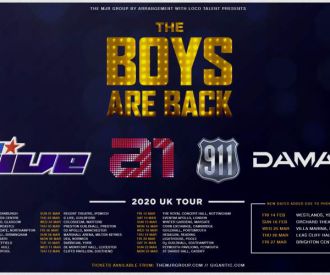 Featuring four of pop’s classic boy bands, 5ive, A1, Damage and 911, the Boys Are Back will undoubtedly be an unforgettable, high energy night of entertainment! Between them, the bands accumulate several smash- hit singles, so expect all of the favourites, including 'Slam Dunk’, ‘Rock The Party’, ‘Everybody Get Up’, ‘Keep on Movin’ ‘Same Old, Brand New You’, ‘Everytime’, ‘Caught In The Middle’, ‘Take On Me’, ‘Wonderful Tonight’, ‘More Than a Woman’, A Little Bit More’, ‘Private Number’’, ‘Bodyshakin’, ‘All I Want Is You’ and many more!

Having sold over 1.6 million albums and 2.4 million singles in the UK, the multi-award winning 5ive, which is composed of band members Ritchie Neville, Sean Conlon and Scott Robinson, were formed in 1997 by the same team who managed the Spice Girls. Enjoying immense success worldwide, 5ive are often considered pioneers of the noughties pin up boy band wave.

Consisting of bands members Ben Adams, Paul Marazzi, Mark Read and Christian Ingebrigtsen, the Brit award winning, British Norwegian band first made its mark in the UK in 1999. Having seen huge international success, A1 has sold over 10 million records worldwide.

911, the fourth band in the mix, features band members Lee Brennan, Jimmy Constable and Simon "Spike" Dawbarn and has sold millions of records world wide, as well as a UK number 1 hit single!

Experience this incredible concoction of pop music legends live on stage and buy your tickets today!