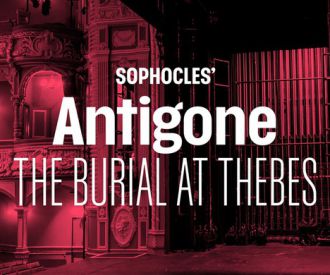 Tickets for Sophocles’ Antigone: The Burial At Thebes

1NOTE: approximate address. The only address that is completely valid is the one shown on the tickets.
0
FollowWhy?

Translated and adapted by Irish Nobel laureate Seamus Heany, Sophocles’ Antigone: The Burial At Thebes comes to London as a captivating live stage production. Featuring a chorus of young performers from the Lyric Hammersmith theatre, Sophocles’ Antigone is a breathtaking recreation of the classical Greek tale which centres on a young woman who must fight for what she believes in.

Directed by the award winning and highly acclaimed Roy Alexander Weise (Sucker Punch, Nine Night, Mountaintop), Sophocles’ Antigone: The Burial At Thebes  is expected to be a sell-out show so purchase your tickets in advance to avoid disappointment!

Beginning when the war is over, daughter of King Oedipus, Antigone discovers that both of her brothers are dead. Fighting on opposing sides during the war, the brothers met on the battlefield and killed each other. Creon, King of Thebes, declares that one brother should be granted burial not the other. How will Antigone, when she disagrees with her sister, fight for justice in a world where women are granted little power?

Sophocles’ Antigone:  The Burial At Thebes will be showing at the Lyric Hammersmith theatre which is located in the West End theatre district. The main house section of the theatre has a capacity of 591 fixed seats after its refurbishment in 2018 and it is divided into the Stalls, the Circle and the Upper Circle. The Lyric Hammersmith is a producing theatre and also strives to nurture the creativity of young people.

How to get there

Located West of central London, the Lyric Hammersmith is in the area of Hammersmith. The theatre can be accessed by both public transport and car. The full Lyric and Hammersmith address is:

The closest train station is Kensington (Olympia) which is about a 20 minute walk away. When you leave the station, turn left onto Olympia Way and then at Hammersmith Road turn right. Continue on this road for about 15 minutes until you reach King Street. The theatre is on the right in Lyric Square. It is also possible to take the bus from Kensington train station.

The theatre is a 2 minute walk away from Hammersmith tube station which is served by the Piccadilly, District, Circle and Hammersmith & City lines.

The nearest car park to the theatre is King’s Malls theatre on Glenthorne Road which is a 24 hour car park. The theatre is not part of the Q-park Theatreland scheme. However, it is outside of the London Congestion Charge zone.

The Lyric Hammersmith has two lifts to both the Main House and the Studio section of the theatre. There are a variety of toilet facilities available including all-gender, gender specific and private accessible toilets which are in the cafe, the stalls, the balcony and near the creative space.

The Hammersmith tube station has good access and the theatre is about 200 yards from all tube station.

If you are driving, there are disabled parking spaces in the King’s Mall shopping centre car park on level 6 and 7. Lyric Square is only a short work from here

Photos of Sophocles’ Antigone: The Burial At Thebes 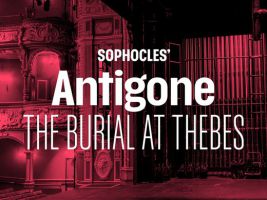 The Burial at Thebes by Seamus Heaney

Ticket prices for Sophocles’ Antigone: The Burial At Thebes

Sophocles’ Antigone: The Burial At Thebes