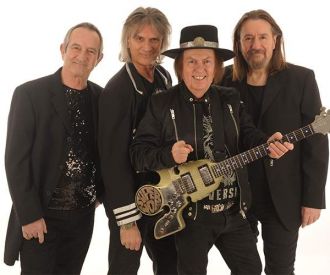 Winners of 17 consecutive top 20 hits and six number ones in the UK Singles Charts, quintessential British glam rock band Slade are known for their hit single ‘Merry Xmas Everybody’ as well as many other classic hits! Featuring David Hill, Don Powell, John Berry and Mal McNulty, the band were originally fronted by Noddy Holder.

After forming in Wolverhampton in 1966, the band released their debut album ‘Beginnings’ in 1969 under the name Ambrose Slade. However, the band really rose to prominence in 1972 with the release of their 1972 album ‘Slayed’ which made it to number in the UK Albums Chart. In 1974, their successful album ‘Old New Borrowed and Blue’ reached number 1.

Having sold over 50 million records worldwide, Slade are undoubtedly considered one of the most successful and renowned UK glam rock bands. In the lead up to Christmas 2021, Slade have announced an exciting Christmas Tour across the UK in December 2021!

What is Slade's biggest hit?

Slade's biggest selling single is undoubtedly 'Merry Xmas Everybody' which sold an excess of one million copies.

How many number ones have Slade achieved?

Slade have achieved six number ones.

What are Slade's albums?

Who is in Slade?

What genre of music is Slade?

Where did Slade form?

Where did Slade form?

Yes, Slade are going on tor in the lead up to Christmas 2021. They are visiting Norwich Water Front on 11th December, 02 Ritz Manchester on 19th December, The Picturedrome - West Yorkshire on 21st December, Apex - Bury St Edumus on 22nd December, 02 Academy Newcaslte on 23rd December, Asylum Birmingham on 18th December and there are other venues to be announced.

When did Slade reform?