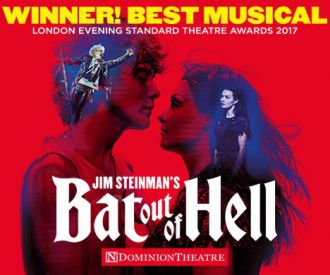 Tickets for Jim Steinman's Bat Out Of Hell - The Musical

Come and discover Bat Out of Hell, Jim Steinman’s reworking of the story of a futuristic Peter Pan. With a similar kind of love story, albeit with much more rock’n’roll, Bat Out of Hell The Musical is based on Meat Loaf’s well-known trilogy: Bat Out of Hell, Back into Hell and The Monster is Loose.

Directed by Jay Scheib, the musical premiered in Manchester in February 2017. It wasn't long before its enormous success spawned versions in other countries, and shows are now in residence in Toronto, Oberhausen and London.

Recommended age: For the over 12s

Bat Out of Hell Tickets

The musical is playing at the Dominion Theatre. Tickets are available in two main areas and prices vary quite considerably.

Stalls: The stalls offer excellent views of the stage and of course, the comfort one would expect from seats of this type. Prices range from £115 in the central area where the visibility is best, to £15 in the last rows.

Circle: Don’t let them fool you, the circle at the Dominion Theatre can offer visibility and comfort just as good as anything you’ll find in the classic stalls area. As well as Premium Level 1 seats, this area also offers all the other levels, which means that prices range from £115 to just £15. (Not recommended for persons with reduced mobility)

Manhattan, 2030. In a post-apocalyptic world, Strat and the kids known as the “Lost Boys” form a band with a strange genetic modification which means that whenever they turn 18, they stay that age forever. This band of bikers lives in the abandoned tube stations of Obsidian, whose streets are controlled by Falco, a cruel multimillionaire tyrant.

We’ll also meet Raven, Falco’s young daughter who has just turned 18 and who lives under lock and key in a tower, overprotected by her father. Even though she lives in the same city as Strat, hers is a quite different reality.

Bat Out of Hell is a story of the love that grows between two very different young people; it is the story of their difficulties, their struggle against authority and their attempt to escape. It is also the story of Tink, a member of the “Lost Boys” who is secretly in love with Strat.

The address of the Dominion Theatre is 268-269 Tottenham Court Road, London W1T 7AQ.

Recommended age: Due to strong language, partial nudity and the sexual nature of part of the plot, this musical is not recommended for children under the age of 12. Young people between the ages of 12 and 16 are allowed into the musical at the discretion of their legal guardians. Please remember that children under 5 years of age will not be allowed into the musical.

Show running time: This show lasts for up to three hours.

Will there be a tour? For the time being, you can enjoy the show in Toronto, London and Oberhausen.

Accessibility: The Dominion Theatre is strongly committed to accessibility so that everyone can enjoy the show. That is why a member of the organisation will always be on duty at every performance to point out the adapted seats and to assist anyone with reduced mobility if you they need anything during the intermission. If you belong to this group and you are not offered assistance as soon as you arrive at the theatre, please let our staff know. They will be delighted to help you.

Entrance from the street is fully accessible, with no steps and with specially wide doors. The circle is not recommended for people in wheelchairs or with reduced mobility on account of the number of stairs which separate it from the lobby. Although the lobby is fully accessible, there is nowhere to sit down. As a result, the public will not be able to sit until the doors to the theatre and circle are opened.

Guide dogs: Guide dogs may enter the theatre. However, due to the loud nature of the show, you may prefer to leave them with theatre staff the theatre outside the venue. They will be happy to look after them.

Do you want to see Bat Out of Hell? Don’t worry if you’re on a tight budget!

How can I get my hands on cheap tickets? You can see this show and enjoy it just as much as anybody else for only £15, both in the circle and in the stalls. Level 4 seats can be found on both levels (some do offer low visibility however). Sometimes single seats can be left over and put on sale at this price.

The stalls area also has lots of Level 3 seats, which cost £30. These offer better conditions and can even be in the fourth row (some seats have reduced visibility due to the sound system or to their being very close to the stage).

Plan your trip in good time and find the best tickets!

Bat Out of Hell takes to the stage throughout the week from Monday to Saturday at 7:30 PM. There are matinees on Wednesdays and Saturdays at 2:30 PM.

The songs, lyrics and plot are by Jim Steinman.

Is Bat Out of Hell the Musical going on tour?

How long is Bat Out of Hell the Musical?

Bat Out of Hell the Musical is about 3 hours long.

Bat Out of Hell the Musical is about 3 hours long.

The main Meatloaf songs in Bat Out Of Hell the Musical are "Love and Death and an American Guitar", "All Revved Up with No Place to Go/Wasted Youth", "Who Needs the Young?", “Paradise by the Dashboard light”, “Making Love Out of Nothing At All”, “Heaven Can Wait”, “You Took The Words Right Out Of My Mouth”, “Dead Ringer for Love”, “Rock and Roll Dreams Come Through”, “It’s All Coming Back to Me” and “I’d Do Anything For Love”.

The Bat Out of Hell the Musical 2020 cast is made up of Glenn Adamson as Strat i, Martha Kirby (Grease) as Raven. Sharon Sexton as Sloane, Jordan Frazier as Zahara, Jonathan Bishop as Jagwire, Killian Thomas Lefevre as Tink, Alex Lodge as Ledoux and Kellie Gnauck as Valkyrie. The cast is completed by Emily Beth Harrington as Kwaidan, Amy Matthews as Vilmos, Rebecca Lafferty as Scherrzo, Samuel Pope as Hoffmann, Andy Prosser as Markevitch, Jack Heasman as Denym, James Chisholm as Dessasuite, Andrew Carthy as Hollander, Rory Maguire as Astroganger and Billie Hardy as Goddesilla.

What is Bat Out Of Hell the Musical about?

Steinman’s Bat Out of Hell the musical follows the story of Strat, the rebellious leader of the gang ‘The Lost’ and his romance with Raven, the daughter of the tyrannical ruler of Obsidian. The musical features Meatloaf songs throughout.

Who wrote Bat Out of Hell the Musical?

Jim Steinman wrote the book, music and lyrics for Bat Out of Hell the Musical.

Who directed Bat Out of Hell the Musical?

Bat Out of Hell the Musical was directed by Jay Scheib.

Where has Bat Out of Hell the Musical previously played?

Bat Out of Hell the Musical has previously played at Manchester Opera House, London Coliseum and London's Dominion Theatre, as well as playing in Canada, Germany and New York.

When did Bat Out of Hell the Musical first premiere?

Bat Out of Hell the Musical first premiered on 17th February 2017.

Photos of Jim Steinman's Bat Out Of Hell - The Musical

Tonight at the London Palladium | Bat Out of Hell (Musical)

OFFICIAL TRAILER | Bat Out of Hell The Musical

Ticket prices for Jim Steinman's Bat Out Of Hell - The Musical

Bat Out Of Hell at Opera House Manchester