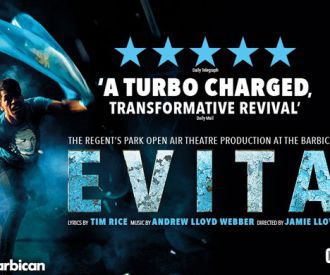 Boasting a sensational musical score from Andrew Lloyd Weber as well as lyrics and book by Tim Rice, Evita, the classic West End musical, Evita, has made an exciting, contemporary revival! Having previously enthralled audiences with its sell-out run at Regent’s Park Open Air Theatre, Evita transfers to the Barbican Theatre for a limited time only in summer 2020!

Brought to you by the critically acclaimed director Jamie Lloyd, Evita is set to storm the West End with its breath-taking choreography, fascinating story-line and mesmerising musical score, including hits Don’t Cry For Me Argentina, Oh What A Circus, Another Suitcase in Another Hall, and the Oscar-winning You Must Love Me. Tickets for Evita are expected to be in high demand so we recommend booking in advance to avoid disappointment!

Following the moving, powerful story of Eva Peron, the first lady of Argentina, Evita begins with Eva’s early life in extreme poverty. Tracing her rise to power as an Argentinian actress and then the wife to President Juan Peron, Evita is a profound and detailed exploration of Eva’s rise to power and how her life sadly ended.

Tickets for Evita start at £36 and the most expensive tickets are £78. The Barbican theatre is a fairly large auditorium with  a capacity of 1158 seats. There are 687 seats in the Stalls, 195 seats in the Circle, 139 seats in the Upper Circle and 137 seats in the Gallery.

If you are looking for premium seats, these can be found in the mid centre of the Stalls and at the front of the Circle which provide excellent views of the stage.

If you are looking for more reasonably priced tickets, then these can be found in the Gallery and the Upper circle which have slightly restricted views of the stage. There are also cheaper tickets at the sides of the theatre in the Circle, the Upper Circle and the Gallery.

Train: the closest station to the Barbican centre is Moorgate Station which is about a 12 minute walk away.

Bus: you can use one of the several bus stops near the Barbican Centre. The 153 stops behind the Barbican, on Beech Street. There are Routes 26, 100, 3888 which all stop on London Wall by the Museum of London, and the 4 and 56 also stop on Aldersgate Street.

Car: there is a car park at the Barbican Centre which can be reached via Silk Street or the Beech Street tunnel. Short stay parking passes are £9 but there are other passes available for regular customers.

The main entrance to the Barbican Theatre is located on Silk Street and can be accessed using a slight ramp. There is a bridge link with step-free access after this entrance which provides step-free access to the Ground Floor.

There are theatre lifts on each floor which provide access to every auditorium section and main lifts which go between the Stalls and the Ground Floor. There are 3 wheelchairs available for visitor use but please book them on arrival. Staff are there to help you navigate the theatre and provide customer assistance throughout your visit.

Where is Evita the Musical showing in London?

After a hugely successful run at Regent’s Park Open Air Theatre, Evita the Musical will be showing at the Barbican theatre in summer 2020.

What songs are in Evita the Musical?

The main songs in Evita the Musical include "Requiem for Evita", “Oh What a Circus”, ‘Another Suitcase in Another Hall’ ,“On This Night of A Thousand Stars”, “Buenos Aires”, “The Lady’s Got Potential”, “Charity Concert”, “Hello Goodbye”, “Peron’s Latest Flame”, “High Flying Adored”, ‘Don’t Cry for Me Argentina’,“Rainbow Tour”, “You Must Love Me”, “She is a Diamond”, “Dice Are Rolling”.

Who is in Evita the Musical UK cast?

How long is Evita the Musical?

What is Evita the Musical about?

Evita the Musical follows the fascinating life and rise to power of first lady of Argentina, Eva Perron. Also an actress, Eva Perron was one of the first celebrity political figures and was both respected and hated by the rest of Argentina.

Who wrote Evita the Musical?

The original version was written by Andrew Lloy Weber and Tim Rice, however this version has been adapted by Jamie Lloyd.

When did Evita the Musical premiere?

Evita the Musical premiered on the West End in 1978.

What is the recommended age of Evita the Musical?

The recommended age of Evita the Musical is 10+.

Is Evita the Musical going on tour?

No, Evita the Musical is not going on a UK tour and visiting Manchester, Birmingham, Ediburgh, Glasgow, Bristol or Leeds. It is only showing in London. 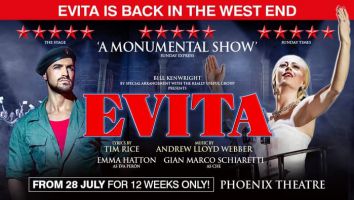 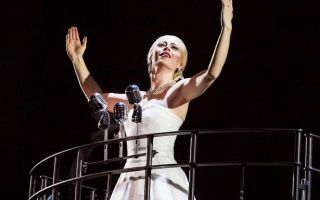 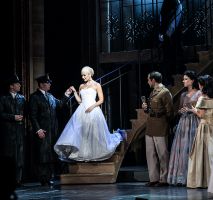 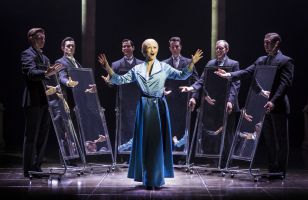