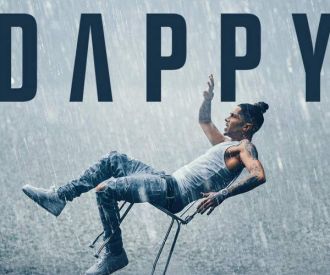 Instrumental in his contribution to urban-pop and grime trio N-Dubz, Dappy, born Costadinos Contostavlos, has broken away from the group with his successful solo career! Along with his music, Dappy is also known for his style and notably his trademark woolen chullos with one of the ear-flaps turned up, which were referred to as “Dappy hats”.

Originally from Camden, London, Dappy was a part of N-Dubz from 200-2011 alongside band members Tulisia and Frazar, which achieved eight top 40 hits on the UK Singles Chart. Dappy began his solo career when he appeared as a guest artist on Tinchy Stryder’s single “Spaceship”.

Dappy then decided to re-release “No Regrets” as a solo effort which peaked at #1 in the UK, which gained him praise from other international artists and different audiences. He released his debut solo album ‘Bad Intentions’ in 2012, as well as several other hit singles and EPs which were met with great acclaim.

After having to cancel his Duki’s Playground tour due to Covid-19, Dappy is finally visiting most cities in the UK and Ireland from November 2021. Expect tracks from his album ‘Bad Intentions’ as well as brand new EPs and singles whilst you experience his incredible stage presence!

What are Dappy’s biggest hits?

What are Dappy’s albums?


When did Dappy begin his solo career?

Where is Dappy from?

Dappy is from Camden London.

What style of music is Dappy?