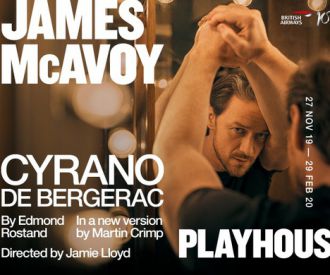 Starring the Golden Globe and Olivier Award-nominated actor James McAvoy, Edmond Rostand’s classic 19th century play Cyrano de Bergerac has made an exciting revival this winter. Adapted by Martin Crimp and directed by the highly successful Jamie Lloyd,  Lloyd and McAvoy are reuinted after previously collaborating together on the 2013 production of Macbeth. X-men star McAvoy plays the show’s titular character, Cyrano de Bergerac, a talented poet and soldier who falls in love but doubts himself because of his large nose.

Cyrano de Bergerac has enjoyed dozens of revivals over the years, such as the Tony-award winning musical production in 1973 as well as several film adaptations, such as the 1987 comedy film Roxanne, which stars Steve Martin and Daryl Hannah. Do not miss out on this 2019 long-awaited adaptation of a timeless classic!

The show's eponymous character, Cyrano de Bergerac, is a gifted poet serving in the French army. However, he is ashamed of his noticeably large nose which lowers his self-esteem. When he falls deeply in love with the beautiful and clever Roxanne, he doubts himself too much to act on his love for her. Instead, he writes her love letters on behalf of cadet Christian, who also wishes to marry her. Although Roxanne falls in love with Cyrano’s powerful poetic words, the love letters are signed by Christian; leading to a tragic love triangle.

An enticing and much-loved story-line which was originally written in verse, Cyrano de Bergerac has been captivating audiences since the 19th century and undoubtedly, this highly-anticipated adaptation will continue to do so.

Director Jamie Lloyd, who is passionate about diversifying cinema audiences, has provided 15,000 Cyrano de Bergerac free tickets. These tickets will be given to outreach managers working at secondary state schools and community organisations, allowing people who are unlikely to have the means to access the theatre an opportunity to see Cyrano de Bergerac. You can download the enquiry form on the official website.

Along with the free tickets, Jamie Lloyd is also giving out 15,000 £15 Cyrano de Bergerac cheap tickets for theatre-goers who are under 30, a key worker, or receiving job seekers allowance/other government benefits. These £15 performances will take place on Monday evenings and Thursday matinees; the first four performances will take place on 2nd December evening, 12 December matinee, 16 December evening and 6 January matinee. Cyrano de Bergerac tickets for these showings will go on sale on Monday the 4th November at 12pm via a special ticketing link.

There are 786 seats in the Playhouse Theatre which is split into three sections: Stalls, Dress Circle and Upper Circle. Ticket prices range from £39.00 to £150.00. The cheapest tickets can be found in the Upper Circle and the premium seats in the middle of the Stalls and at the front of the Dress circle.

Stalls: Located on the same level as the stage, the stalls has some of the most premium seats in the house which are in the mid-centre of the stalls. There are also some cheaper seats at the front close to the stage.

Dress Circle: a level up from the stalls, there are some excellent views in the dress circle, and these are the most expensive seats, right at the front. Cheaper seats are further back.

Upper circle: as the highest level in the theatre and furthest away from the stage, you can purchase much cheaper seats in the upper circle and to the sides; there is a restricted view and less leg room.

How to get there:

Public transport is recommended to get to the Playhouse Theatre as it is in the London congestion zone. The nearest car park is the Q-Park Trafalgar.

The nearest underground station to the theatre is Embankment. (Bakerloo/Circle/District/Northern Line)

Charing cross is also near the theatre (Bakerloo/Northern Lines)

The nearest station is Charing cross

It is important to book these wheelchair spaces in advance and call the theatre beforehand on 0800 912 6971 or email customercare@theambassadors.com. Access customers and their patrons will receive discounts for performances.

Getting to the venue

The entrance to the Playhouse Theatre is on street level but up three steps. A temporary wheelchair ramp can be provided.

The Stalls are accessible and are a step-free form foyer to seating. Unfortunately, the Playhouse does not have a lift and the other sections of the theatre must be accessed by stairs.

Throughout your theatre experience, staff are there to help and assist with anything. An at-seat service is provided and staff can store wheelchairs during the performance. We do recommend that wheelchair users bring a companion. Theatre doors are always manned, if assistance in the Stalls is required.

James McAvoy Is Returning To The Theatre