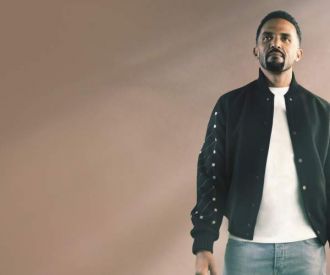 Having racked up an astonishing number of awards, including several Brit awards and two Grammys, there is no doubt that British singer, songwriter, rapper and DJ Craig David is one of the most legendary and influential R&B artists from the UK. Known for his R&B style tinged with garage, international pop sensation Craig David has achieved 20 UK Top singles and sold over 15 million albums world wide.

Born in Southampton, Craig David made his breakthrough after appearing on the Artful Dodger’s single “Re-Rewind", followed by his explosive solo 2000 debut album, Born to Do It, which hit number 1 in the UK Album chart. Since then, he has released five more studio albums and worked with prolific artists such as Sting, Tinchy Strider, Big Narstie and Kano.

After releasing his 2016 album Following My Intuition via Insanity records and Sony Music in 2016, he embarked on an extensive UK tour. As well as headlining his own performances, Craig David has performed at world class festivals, such as Notting Hill Carnival, Bestival, Kew the Music and many more. While David has garnered an impressive collection of hits during his career, some of his most famous tracks include "Fill Me In", "I'm Ready", "Wonderful Tonight” from the 90s, “Where’s Your Love” “What’s Your Flava” and “Insomnia”. His most recent album, The Time is Now, marks a change in style is more rooted in Tropical House and features singles “Heartline” and “I Know You”.

In Spring 2020, internationally acclaimed R&B star Craig David embarks on an extensive UK and European arena tour, which is followed by summer performances at festivals. Featuring a mixture of his older hits and more recent numbers, there is no doubt that experiencing the R&B legend performing live on stage will be an unforgettable evening of entertainment. Whether you are a longtime Craig David fan or have recently discovered his music, this show is not to be missed1

What are Craig David’s top songs?

Craig David’s top songs are Fill Me In", "I'm Ready", "Wonderful Tonight”,“Where’s Your Love” “What’s Your Flava” ,“Insomnia” “Heartline” and “I Know You”.

Craig David’s arena tour has been postponed but more dates will be announced.

What is Craig David’s biggest song?

Fill Me In Is Craig David’s biggest single to date.

When did Craig David start his music career?

Craig David’s music career really took off after he appeared on the Artful Dodger’s single rewind in 1999.

How many awards has Craig David won?

Craig David has won a total of 12 awards, including two Grammys and several Brit awards.

What genre of music does Craig David produce?

Craig David intertwines a number of different styles and genres, but his music is primarily rooted in R&B and more recently, Tropical House.

Where is Craig David from?

How many UK Top Singles has he achieved?

What was the name of Craig David’s first album?

Craig David’s first album was called Born To Do It which he released in 2000.

Craig David - When You Know What Love Is (Official Video)