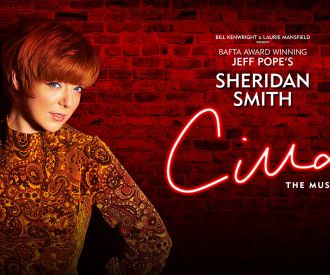 Tickets for Cilla The Musical

Bringing Bafta- award winning Jeff Pope’s phenomenal, ITV television series to life on stage, Cilla the Musical is going on tour! Featuring a stellar ‘60s soundtrack, including hits such as Anyone Who Had a Heart, Alfie and Something Tells Me, Twist and Shout and California Dreamin, Cilla the Musical beautifully depicts one of Britain’s much-loved entertainers with a unique and fitting way!

A heart-warming story following a Liverpool girl’s rise to stardom, Cilla Black becomes a number one selling singer and TV star by the age of 25 after an introduction by John Lennon and Brian Epstien.

Starring the legendary Sheridan Smith as Cilla and boasting an incredible creative team including Bill Kenwright, Laurie Mansfield, Bob Tomson and Robert WIllis, Cilla the Musical will leave you speechless. Grab your tickets now for a spectacular evening of entertainment from the one and only Cilla!

What is Cilla the Musical about?

Cilla the Musical follows the story of Cilla Black and how she rises to stardom from her humble beginnings in Liverpool. By the age of 25, she becomes a number one selling singer and TV star.

Which songs are in Cilla the Musical?

Cilla the Musical includes songs such as Anyone Had a Heart, Alfie, I Only Live to Love You, Liverpool Lullaby, Step Inside Love and Something Tells Me.

No, these tour dates have now closed.

Who wrote Cilla the Musical?

Is Cilla the Musical a TV series?

Yes, Cilla the Musical is a Bafta award winning TV series by Jeff Pope and this is what the musical is based on.

Who starred in the 2020 production of Cilla the Musical?

Sheridan Smith starred in the 2020 production of Cilla the Musical.

Photos of Cilla The Musical

Cilla The Musical
+ info
Several locations
No events
-
Follow
Why?

Prior events Cilla The Musical

Cilla - The Musical at The Alexandra Theatre, Birmingham