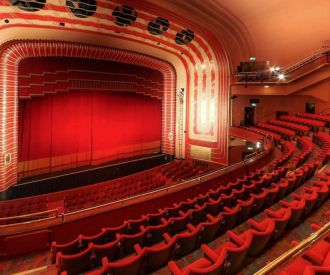 Standing proudly on Georges Street for almost 200 years, the New Theatre Oxford is steeped in British history and is one of the most prominent theatre venues in Oxford. Despite Oxford being a smaller city, the New Theatre welcomes an impressive variety of smash-hit touring musicals, theatre, opera, dance, comedy and many more. For example, the New Theatre has welcomed the likes of Chicago, Guys and Dolls, Cats, Ricky gervais, Dame Barbra Windsor, Micheal Buble and the English National Ballet. If you are wondering what’s on at the New Oxford, there is always an excellent show to choose from!

Situated in the heart of the vibrant and quintessentially British city of Oxford, the New Theatre building is full of character and history; it is on its third version of the venue. The New Theatre is now managed by the Ambassador Theatre Group, who bought the venue in 2009 and owns approximately 50 theatre venues across the UK.

The New Theatre Oxford is a large auditorium with a seating capacity of 1,785 seats. It is divided across three levels: The Stalls, the Circle and the Balcony. Depending on your budget, ticket prices vary greatly depending on where you decide to sit in the theatre.

The Stalls: as the section of the theatre located closest to the stage, the Stalls is the largest part of the theatre with 816 seats. You can find excellent seats in the middle of the Stalls and particularly between Row C and Row K. If you are looking for discounted tickets, then these can be found at the back of the Stalls, where ticket prices are heavily discounted despite providing excellent views of the stage.

The Balcony: as the section of the theatre furthest away from the stage in the third tier, the Balcony has 413 seats and you can definitely find some bargain tickets. There are also some excellent seats in the centre of the Balcony providing panoramic views of the stage.


The Box Office will open 2 hours before the performance starts if it is on a Sunday or Bank Holiday. It will close 15 minutes after the show starts.

Car: the closest car park to the New Theatre Oxford is Worcester Street car park which is about a 5 minute walk away. There is also Gloucester Green car park close to the theatre which is slightly smaller. However, it is recommended that you use the park and ride scheme; there is more information about this on the official website.

Train: if you are taking the train, then the Oxford train station is only about a 10 minute walk away from the theatre and has many national rail services.

If you have any access enquiries prior to your visit or need to book assistance during your visit, please call the Access Booking Line on 0800 912 6971 or email michaelbethell@theambassadors.com. There are also discounted tickets available for patrons and one companion so please contact the New Theatre beforehand if you are eligible for these tickets.

The main entrance of the New Theatre Oxford is located on George Street and there is a drop-off point directly adjacent to the theatre. There is step-free access to the foyer and box office and also level access using the side entrance on Victoria Court.

There is no customer lift in the New Oxford theatre and most sections of the theatre must be reached by steps. However, there is a customer and wheelchair lift which can take patrons down to the Stalls or a small flight of 6 steps. The Stalls is the recommended area of the theatre for patrons as it is easily accessible and also has a wheelchair bay in X7-15. The Circle is 15+ steps up from the Foyer and the Balcony is 25+. Given that there is no customer lift to these sections, they are much more difficult to access.


Staff are there to assist patrons throughout their visit in navigating the theatre and also providing an at-seat service for those who are unable to access the bars. Please let staff know beforehand if you require this service.

Staff are happy to help with transfers however you must bring a companion and do so in the aisle seat. Wheelchairs and walkers can be stored throughout the duration of the performance.

IN 1934, the third New Theatre opened and its capacity increased dramatically while it also welcomed many different forms of world class entertainment. When it changed hands in 1977, it was taken over by Apollo Leisure who called it The Apollo and then it was owned by Clear Channel Entertainment in 2001. In 2003, it finally returned to its original name the New Oxford Theatre. 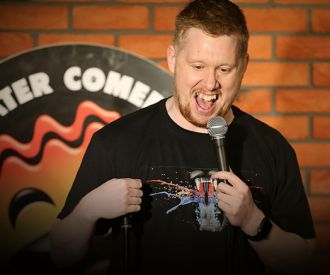