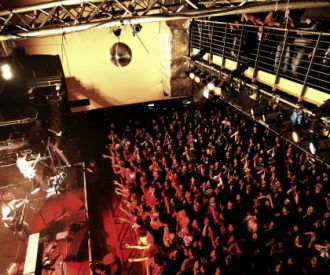 A purpose built entertainment centre, the O2 Academy Islington is known for hosting a variety of live entertainment as well as club nights. With regards to music, the O2 Academy Islington is known for welcoming a huge variety of prolific rock and indie bands such as Bon Jovi, Fall Out Boy, the Cure, Muse, Biffy Clyro, Funeral For a Friend, KISS, Yeah Yeah Yeahs and the Script. It has also hosted artists from other genres, such as the incredibly famous rapper, Eminem, hip hop artist Tyler the Creator and pop singer JoJo. The O2 Academy Islington has also become known for its popular club nights, including the weekly pop and disco party, Club De Fromage.

Underground: for those who are taking the tube, then the nearest underground station is Angel.

Train: if you are planning on taking the train, then the closest overground train station is Highbury and Islington rail station, which is 0.9 miles away. Alternatively, Kings Cross and St Pancras train stations are about 20 minutes by foot from the O2 Academy Islington.

Car: please be aware that the venue is inside the London Congestion Charge Zone. If you are driving to the venue, then you can use a 100 space car park which is located in Angel Central, on Parkfield Street, which is just off Upper Street and accessed via Berners Road.

Prior to your visit, please call the O2 Academy Islington access line on +44 (0)20 7288 4400 if you have any enquiries or need to make access bookings. Access customers are also eligible to one free ticket for a companion, please call the access number to book this. However, please be aware that it is necessary to prove that you are eligible.

To save you time and hassle on your next booking, the O2 Academy Islington accepts the Access Card, meaning that your details will be saved with us every time you make a booking.

There are many wheelchair spaces available, but lease remember that they are booked on a first come and first served basis, so it is worth booking far in advance. There are viewing areas are available for access customers as well as companions.

There are several bars in the O2 Academy Islington and also a cloakroom but please be aware that this has limited space.

Age restrictions can differ depending on the event but here are a few general rules: