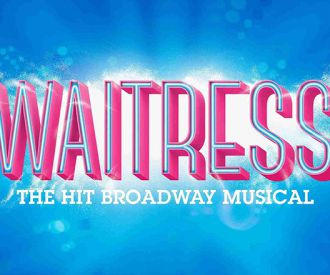 Waitress is the new musical that’s waiting for you in London’s West End. Created by an all-female team and starring Katharine McPhee, it tells the story of a young pastry chef trapped in a life that doesn’t entirely satisfy her. Will she be able to cope with change? Will she be brave enough to choose happiness?

With an unforgettable musical score by Sara Bareilles and direction from the Tony Award-winner Diane Paulus, Waitress is a heart-warming story of how a young woman struggles against all odds to acheive her dream...

Jenna is an expert pastry chef and waitress who pours all her passion into each one of her creations. However, it’s not as happy a life as she had dreamed, trapped as she is in her small town and an unsatisfactory marriage. Jenna aspires to so much more.

But it won’t take long before a life-changing opportunity knocks at her door in the form of a pastry contest in a nearby county. Jenna won’t hesitate to answer the call, to live new experiences and meet new people. Will she be able to cope with all these new developments and will she be able to take control of the change?

How much do the cheapest tickets cost?

You can see the musical for as little as £18. It is an affordable musical for every pocket. You can find this price in the last rows of the upper circle.

When can I buy the cheapest tickets?

Low-price tickets, £18, are only available for specific performances (if not, the cheapest ticket will set you back £35). These can be found more easily in the Monday to Thursday shows, weekend seats cost a little more. Some of these seats have partial or reduced visibility so hurry up if you want to get the cheapest tickets with good visibility.

Are there any last minute deals?

Normally, the lowest prices are for performances in the next few days. We recommend that you check the prices regularly in case you find an unexpected last minute deal.

There are shows every day from Monday to Saturday at 7:30 pm, plus two matinees every Wednesday and Saturday at 2:30 pm. There are no performances on Sundays. It is recommended that you arrive at the theatre half an hour early.

Waitress at the Adelphi Theatre

How can I get to the Adelphi Theatre?

The address of the Adelphi Theatre is as follows: The Strand, London, WC2R ONS.

How long is the Waitress the Musical?

The Waitress the Musical is 2 hours 30 minutes long.

Who is in the Waitress the Musical cast?

What is the Waitress the Musical about?

The Waitress tells the story of a young pastry chef, Jenna, who, unsatisfied with life, feels trapped in her small town and unhappy marriage. However, her life could change forever when a pastry content in a nearby county comes along and much to her surprise, she falls pregnant.

What songs are in the Waitress the Musical?

The main songs in the Waitress the Musical are What’s Inside, Opening up, The Negative, What Baking Can Do, Club Knocked Up, Pomatter Pie, When He Sees Me, It Only Takes a Taste, You Will Still Be Mine, A Soft Place To Land, Never Ever Getting Rid Of Me, Bad Idea

Where is the Waitress the Musical playing in London?

The Waitress the Musical is showing at the Adelphi Theatre in London.

Is the Waitress the Musical going on tour?

Who wrote the Waitress the Musical?

Sara Bareilles and Jessie Nelson wrote the Waitress the Musical.

What quotes are from the Waitress the Musical?

Some of the main quotes from the Waitress the Musical are: “She’s imperfect but she tries, She’s messy but she’s kind” from She Used to Be Mine, My mama used to say you can live to be a 100 if you give up all the things that make you wanna live to be a 100, It’s addictive the minute you let yourself think “The things that I say might matter to someone”.

Who directed the Waitress the Musical?

Where is the Waitress the Musical set?

The Waitress the Musical is set in the American South.

Catherine Lewis
Excellent Absolutely incredible. I found the story line so moving and the musical score is amazing. I\'ve already downloaded it on Spotify!