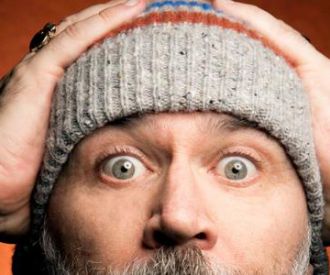 Known for his legendary stand-up shows and role in the award-winning TV show Derry Girls , Irish comedian Tommy Tiernan never fails to enthrall an audience with his witty and wonderfully eccentric humour. With over eight stand-up comedy DVDs and holding the record of the highest selling DVD sales in Ireland, Tiernan continues to be an incredibly successful comedian and Irish national treasure.

Originally from Carndonagh in Ireland, Tommy moved around a lot as a child and also lived in Cork, London and Zambia, before settling in Galloway. Beginning his comedy career in 1992, Tommy started off byp performing at small circuit comedy clubs around Galloway. IN 1996, he made his breakthrough winning the Channel 4 So You Think You’re Funny Award and a few years later, he achieved the Perrier Award at the Edinburgh Festival Fringe. Tienanmen also made an appearance in the final season of Father Ted and since then, he has occasionally acted, including Channel 4’s Derry Girls.

In 2003, he received the Nokia Best of the Fest Award and the Orange People Choice Award at the Edinburgh Comedy Festival. Three years later, in 2006 Tiernan took the title as Ireland’s Funniest Living Person Award at the People of the Years Awards. He famously took the title as the longest running stand-up comedian in 2009 and set the Guinness World Record, achieving 36 hours and 15 minutes.

Tommy Tiernan is back with plenty of hilarious anecdotes, energy and his usual flamboyant style in his brand new show, Tomfoolery. Having enjoyed sell-out shows in the past, Tommy Tiernan tickets are expected to sell out fast so we recommend booking them in advance. Experience an evening of pure tomfoolery and monumental story-telling with one of the hottest comedians of the minute!

Tommy Tiernan on being racist with the Travellers