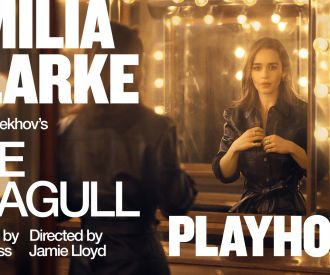 Tickets for The Seagull

Known internationally for her role as Mother of Dragons in the multi-award winning TV show Game of Thrones, Emilia Clarke makes her West End debut in a modern production of Anton Chekov’s much-loved classic, The Seagull. Starring as Nina, the leading female role, The Seagull is showing at the Playhouse theatre for a limited time only.

A 21st century adaptation which includes modern twists, The Seagull is set in the 19th Century Russian countryside and follows the dramatic and moving conflicts between four characters: Boris Trigorin, Nina Irina Arkadina and Konstantin Tréplev who find themselves together in an old Russian manor house.

Brought to you by the critically acclaimed director Jamie Lloyd (Macbeth, Cyrano de Bergerac) and his theatre company, The Seagull is set to be a sell-out show so grab your tickets now for an unforgettable theatrical experience with national treasure Emilia Clarke.

The Seagull ticket prices start at £15 and reach £144. The most expensive tickets, which are undoubtedly the best seats in the house, provide incredible views of the stage and can be found in the middle of the Stalls directly opposite the stage. You can also find excellent seats in the centre of the Dress Circle.

If you are looking for more reasonably priced tickets, these can be found in the Upper Circle which is the section of the theatre which is furthest from the stage. There are also slightly cheaper tickets at the back of the Dress Circle.

The Jamie Lloyd theatre company is dedicated to diversifying theatre audiences and making the theatre more accessible. With the support of British Airways, the Jame Lloyd theatre company is providing 15,000 free tickets to first time theatre goers and 15,000 tickets at £15 for key workers, under 30s, and those receiving job seeker’s allowance or other government benefits. For more information on this visit the website

The Playhouse Theatre, which was originally known as the Royal Avenue Theatre, is located in the middle of the West End. The easiest way to get to the theatre is by public transport but you can also access it by car and it is part of the Q park theatre scheme. Here is the Playhouse Theatre address:

Tube: the closest tube station is embankment which serves the District, Circle, Northern and Bakerloo lines. You can also access the Playhouse theatre from Charing Cross tube station

Train: the closest train station is Charing Cross station which is only a 5 minute walk away. Charing Cross Station serves national rail services.

Car: the closest car parks, which are part of the Q Park scheme, are Chinatown and Trafalgar Square. The Q Park scheme gives you 50% off parking costs when staff validate the parking ticket. These car parks are a 10 to 15 minute walk from the theatre.

We recommend that you contact the theatre beforehand if you have any access problems. Please call: 0800 912 6971 or email: customercare@theambassadors.com

Getting to the Playhouse Theatre

The theatre’s main foyer is on the Northumberland Avenue which is three steps up from street level through double doors. A temporary ramp can also be provided.

There is no customer lift within the theatre and most sections of the theatres must be accessed by stairs. However, the Stalls are step-free from the foyer to the seating area.

Staff are happy to assist access customers navigate the theatre and also help with the temporary ramp. Theatre staff can also help with wheelchair transfers and provide seat-service.

The Seagull will be showing at the Playhouse theatre from Wednesday 11 March - Saturday 30th May 2020.

Photos of The Seagull

The Seagull
+ info
Several locations
No events
-
Follow
Why?

Prior events The Seagull