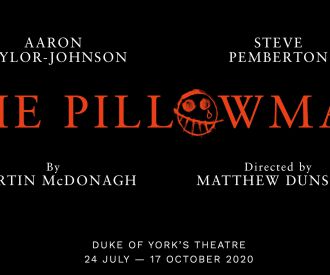 Tickets for The Pillowman

Following a sell-out run at the London National theatre, Martin McDonagh’s long-awaited, Olivier award-winning play is coming to the West End for a limited time only! Starring the highly acclaimed Aaron Taylor-Johnson (Nowhere Boy, Nocturnal Animals) alongside Steve Pemberton (The League of Gentlemen, Inside No. 9), the Pillowman boasts an incredible, star-studded cast.

A modern revival of Irish playwright Martin McDonagh’s obscenely funny black comedy, the Pillowman enjoyed its first reading in London, 1995 and then officially premiered in 2003. Its awards include the 2004 Olivier Award for Best New Play, two Tony awards and several other awards and nominations. With tickets expected to be in high demand for this masterpiece, we recommend that you book them in advance!

Whilst living in a totalitarian police state, fiction writer Katurian is working on a series of short stories about gruesome child murders. Yet the writer finds himself subject to interrogation by the authorities as several murder mimic ideas from his work. The police are also interested in his brother, Michel, who is described by Katurain in his stories as “slow to catch on”...

A profound exploration into the role of the artist in society, the Pillowman is a dark but simultaneously hilarious drama which has captivated audiences with its compelling story-line.

Ticket prices for the Pillowman range from £15 to £107; depending on where you choose to sit in the Duke of York’s Theatre means that ticket prices vary greatly. The theatre is divided into three sections: the Stalls, the Royal Circle and the Upper Circle.

If you are looking for premium seating, then it is recommended that you sit in the front-centre of the Stalls or the Royal Circle as you can enjoy an intimate theatrical experience.

If you are looking for discounted tickets, then these can be found at the back of the Upper Circle, as this is the section of the theatre furthest from the stage and there is slightly restricted viewing. Alternatively, there are more reasonably priced tickets at the back of the Royal Circle, as this section of the theatre is further away from the stage.

For bookings of 10+, please call the Ambassador’s Theatre Group line on 020 7206 1174 or email enquiries@groupline.com

The Duke of York’s Theatre

Tube: the closest tube station is Leicester Square (Northern, Piccadilly), then Covent Garden (Piccadilly Line) or Charing Cross Road (Northern, Bakerloo). All of these stations are a short walk away.

Train: Charing Cross train station is only a 10 minute walk away from the venue.

Car: the theatre is part of the Q-Park scheme, meaning you can benefit from 50% off your parking ticket. The nearest car parks which are part of the scheme are in Chinatown and Trafalgar Square, only a 10 minute walk from the theatre.

If you have any questions about access prior to your visit or need to make access bookings, please call the Duke of York’s Theatre access line on 0844 871 7677 (calls cost 7p/pm) or email: doybox@theambassadors.com.

There is also a buy one get one free ticket scheme for patrons and one companion. For more information on this, please call the access line.

Getting Inside the theatre

The Duke of York’s Theatre has an accessible entrance which is located on St Martin’s Lane. The entrance has step-free access to the foyer and also a drop-off point just in front.

The Royal Circle is the most accessible section of the theatre with level access and two wheelchair spaces. Transfers are also possible but please bring a companion with you. Staff are happy to store wheelchairs for the duration of the performance.

There is an at-seat customer service available for those with limited mobility. Please let the theatre know beforehand if you do require this service.

The Pillowman will be showing at the Duke of York’s Theatre from Friday 24th July - Saturday 17th October 2020.

Photos of The Pillowman

The Pillowman by Martin McDonagh | Decadent

The Pillowman
+ info
Several locations
No events
-
Follow
Why?

Prior events The Pillowman

The Pillowman at Duke of York's Theatre