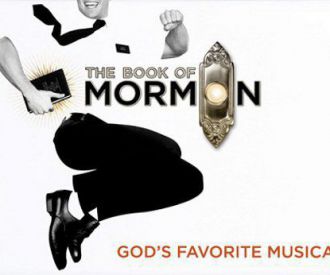 Tickets for The Book of Mormon

Winner of nine Tony Awards, including best musical, The Book of Mormon directly transfers from Broadway to London's West End. This musical, written by the creators of popular US animated series South Park, Trey Parker and Matt Stone, and co-creator of the musical Avenue Q, Robert Lopez, has become one of the most successful and hilarious musical theatre productions in history. Not only has The Book of Mormon scooped up some top awards, it’s also beaten all sales records, making it one of the most popular musicals currently being performed on the West End. The secret of its success? An obscenely funny script, spectacular choreography and a Grammy-award winning musical score.

Anybody who is a fan of the dark, satircal and potentially offensive humour in South Park or from the work of Trey Parker and Matt Stone will love the Book of Mormon, yet admiteddly, Parker and Stone's sense of humour is not for everyone. Yet despite this, the hilarious story of missionaries Elder Cunningham and Elder Price has recieved an extremely positive reception. Grab your theatre tickets now for an unforgettable evening of entertainment!

Elder Cunningham and Elder Price are two mismatched Mormon missionaries sent from Salt Lake City, Utah, to a remote hamlet in Uganda, to preach and convert the natives to Mormonism. Their journey is cut short when they discover the subhuman conditions the villagers are living in. This is because of murderous military overlord, who wreaks havoc among the locals and destroys the missionaries’ aspirations to spread their religious beliefs.  Yet despite being faced with a difficult situation, Elder Price and Elder Cunningham are determined to help the villagers as part of their mission...

The Book of Mormon Tickets 2021

How much are The Book of Mormon tickets?

How do I get Book of Mormon tickets cheap?

The Book of Mormon in Prince of Wales Theatre

The Prince of Wales Theatre has been at the centre of musical theatre in London since 1937. Located in the heart of Piccadilly Circus, this West End theatre has hosted such popular musicals as Let It Be, Mamma Mia! and, since 2013, The Book of Mormon.  It has become a major London Theatre in the West End. The venue can hold an audience of 1,132 people distributed across just two levels: 679 seats in the stalls and 453 in the circle. The circular layout of the auditorium means the entire stage is visible from nearly every point in the stalls.

You can see the seating plan in our images section.

How do you get to Prince of Wales Theatre, London?

This performance is for over 18s. In view of the adult content and offensive language The Book of Mormon isn’t suitable for children.

2 hours and 30 minutes, including a 15-minute interval.

You’re allowed to take any photographs you like during the performance, as long as you don't use flash. Recording videos of the performance is strictly prohibited.

there are three special seats for wheelchairs in the stalls area: S39, S45 and T39. For people with reduced mobility who are able to move into a seat, two seats are also available in row A. The theatre entrance is totally accessible and there are no architectural barriers that prevent people who use wheelchairs from accessing the stalls. If you’d like to request special assistance before making your reservation, please contact the theatre. You can call the Prince of Wales Access Line on 03444825137 box office on 0 844 482 5115 if you have any access enquiries prior to the performance. On arriving to the theatre, the main entrance on Conventry street has level access to the foyer through double doors and then you can use the customer lift to visit other parts of the theatre.

What is the Book of Mormon about?

The Book of Mormon is about two Mormon missionaries who go to a Ugandan village to preach. However, the missionaries are shocked to find that the villagers are not very interested in religion as they have more pressing matters such as AIDS, famine and oppression from the village warlords.

How long is Book of Mormon?

The Book of Mormon is 2 hours and 30 minutes long.

Who wrote the Book of Mormon?

Trey Parker and Matt Stone, who are the creators of South Park, wrote the Book of Mormon.

Where is Book of Mormon playing in London?

The Book of Mormon is playing at the Prince of Wales Theatre in London.

Photos of The Book of Mormon

I Believe from the Book of Mormon Musical on the 65th Tony Awards.

The Book of Mormon
+ info
Prince of Wales Theatre (London)
View map
Price from:
£24.00
Follow
Why?

Ticket prices for The Book of Mormon

The Book of Mormon