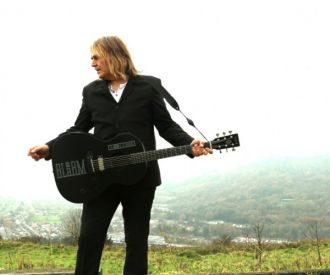 Tickets for The Alarm

As one of the most renowned early 80’s wave bands, the Alarm have made over five-million sales worldwide and achieved 16 Top 50 UK singles, including their highest charting single “Sixty Eight Guns” which reached number 17 in the UK Singles Chart. While the Alarm band members have changed over time, it currently consists of Mike Peters, James Stevenson, Jules Jones Peters and Steve “Smiley” Barnard.

In 1997, the Alarm originally formed as a punk band under lead vocalist Mike Peters. In 1981, they renamed themselves as the Alarm in Rhyl Wales and embraced rock and influences from Welsh language and culture. The Alarm rose to prominence during the 1980s, supporting world-class acts such as U2 and Bob Dylan. The Alarm then went onto release numerous successful albums, including “Declaration” (1984) which featured “Sixty Eight Guns”.

The Alarm recently released their highly anticipated album, Sigma in 2019 and then War in 2021. Having enjoyed an extensive US Summer tour and appeared at the Isle of Wight festival, the Alarm has announced its Sigma Tour!

What are the Alarm's biggest hits?

The Alarm's biggest hit is undoubtedly "Sixty Eight Guns" as well as many other songs such as "the Stand", "Where were you Hiding When the Storm Broke", "The Deceiver" and "the Chant Has Just Begun" , "Rain in the Summertime", "Strength".

What are the Alarm's albums?

Who is in the Alarm?

Who were the Alarm's previous members?

What genre of music is the Alarm?

The Alarm is rooted in rock music which originated in the early 80's new wave.

What was the Alarm's original name?

The Alarm's original name was the Toilets when they formed in 1977.

What is the name of the Alarm's most recent album?

The Alarm's most recent album War was released in 2021.

Where did the Alarm form?

The Alarm formed in Rhyl Wales.

When did the Alarm form?

The Alarm formed in 1981 with their current name.

Photos of The Alarm

The Alarm - Rain In The Summertime

The Alarm next concerts