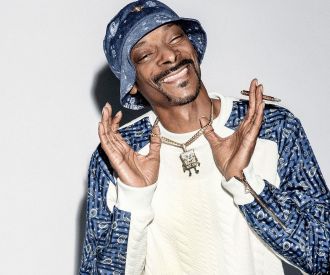 Snoop Dogg, who was born as Calvin Cordozar Broadus Jr, is undoubtedly one of the world’s most influential and famous rappers in the world and has not only sold tens of millions of record sales worldwide and has the most Grammy nominations off any music artist to date (17), but also enjoyed a successful career in movies and TV.

Following the immense success of his first album, Snoop Dogg has released a wealth of hugely successful albums and singles through the noughties including "Drop It Like It’s Hot" which spent a long time on the international charts. More recently, Snoop Dogg released his 15th studio album Neva Left and a gospel album titled Bible of Love in March 2018. Snoop Dogg has also branched out to TV and movies, releasing his esteemed Doggumentary in 2011 and appearing on movies such as Training Day, Starsky & Hutch and The Wash.

After being forced to cancel his first events due to the coronavirus pandemic, Snoop Dogg has rearranged his international tour, visiting most major UK cities as well as other locations in Ireland and elsewhere. Known for his legendary performances, it is definitely worth experiencing the acclaimed rapper live in concert. This is your chance to experience Snoop Dogg’s singles Drop It Like It’s Hot and Gin & Juice live!

What are Snoop Dogg’s albums?

What are Snoop Dogg’s biggest hits?

What genre of music is Snoop Dogg?


When did Snoop Dogg begin his career?

Snoop Dogg started his career in 1992 when he appeared on Dre’s debut solo album, the Chronic.

Has Snoop Dogg won any awards?

What is Snoop Dogg’s birth name?

Where is Snoop Dogg from?

Which films has Snoop Dogg appeared in?