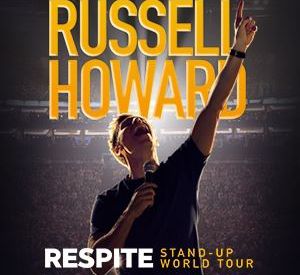 There is no doubt that Russell Howard has not only become one of the UK's most iconic comedians, but also treasured television personalities. Known for his incredible wit and cheeky sense of humour, Russell Howard has enjoyed huge success with his immensely popular TV programme, Russell Howard’s Good News, which has received over 11 million views and has been seen in over 18 countries.

Making his debut working on the Radio for the BBC, Howard has since made regular appearances on comedy shows such as Mock the Week, Never Mind the Buzzcocks, 8 Out Of 10 Cats. Following Russel Howard’s Good News which was showing from 2009-2015, Howard has also taken residency on Sky One’s Russell Howard’s Stand Up Central and Russel Howard & Mum. In 2017, he released a Netflix special, Recalibrate, which received an extremely positive reception!

Exciting news - Russell Howard is embarking on a highly anticipated stand-up world tour in 2020!  Expect  a high energy and obscenely funny evening with Russell Howard's new show is highly satirical, while he tries to make sense of the changing world around us.  Tickets are expected to be in high demand, so purchase your evening for an evening of world class comedy!