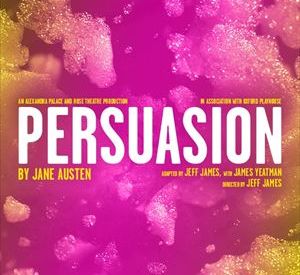 After showing at the Royal Exchange Theatre in 2017, Jeff James and James Yeatman’s daring and incredibly radical adaptation is coming to the Alexandra Palace in London. Capturing Jane Austen’s mastery on stage, Persuasion is undoubtedly one of Jane Austen’s most phenomenal stories.

A contemporary take on Jane Austen’s Persuasion, the play follows the love story between Anne Elliot and Captain Wentworth, whilst also featuring a range of modern music from Frank Ocean, Dua Lipa, Nicki Minaj and Cardi B. Grab your tickets now for an unforgettable theatrical production which is a must-see for any Jane Austen fans!

Anne Elliot rejected Captain Wentworth when his prospects were uncertain eight years ago as although he was undoubtedly the love of her life, her family does not approve. Yet when Wentworth returns, rich and handsome, Anne must face her past head on - will she give into her true desires for Wentworth and will he truly forgive her?

There are some Blue Badge holders available but they come on a first come,first serve basis.

There are a certain number of wheelchairs available but it is recommended that you book them in advance.

Persuasion is showing at the Alexandra Palace from 7th-22nd April 2022.

What is the running time for Persuasion the Play?

The running time for Persuasion the Play has not yet been announced.


What is Persuasion about?

Persuasion is a Jane Austen novel which follows a love story between Captain Wentworth and Anne Elliot. Eight years before, Anne rejects Captain Wentworth because her family does not think he has enough prospects. However he is the love of her life and when he returns rich and handsome, Anne wants to take him back…


Where is Persuasion the Play showing in London?

Persuasion the Play is showing at the Alexandra Palace.

When is Persuasion the Play showing in London?

Persuasion the Play is showing from the 7th-22nd April 2022.


Who produced Persuasion the Play showing at the Alexandra Palace?

Jeff James and James Yeatman produced this version of Persuasion the Play.


Who wrote Persuasion the Book?


Who is in the cast of Jane Austen’s Persuasion?

The cast has not yet been announced.