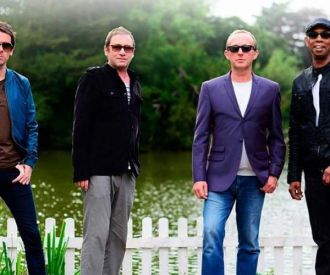 For over 20 years, the legendary indie rock band, Ocean Colour Scene, have been wowing audiences with their original British rock style. Boasting a remarkable seventeen Top 40 singles, and Top 10 albums, including one in 1997, Ocean Colour Scene constantly enjoy success against ever-changing backdrop of British rock ‘n’ roll. While the bands members have changed over the years, the band currently consists of members Simon Fowler, Steve Cradock, Oscar Harrison and Raymond Meade.

Ocean Colour Scene first formed in Birmingham, 1989, and released their first single "Sway" in September 1990. However, their breakthrough took place in 1993, when they supported Paul Weller on his tour. Following this, Ocean Colour Scene made the Top 10 with smash hits "Circle" and "We Caught the Train", and in 1998, “Marchin’ Already” went to number 1, displacing Oasis’ Be Here Now" in the Charts.

Given that in the past, Ocean Colour Scene have enjoyed several sell-out shows, tickets are expected to be in extremely high demand. In order to avoid disappointment, we recommend that you grab your tickets in advance!

What are Ocean Colour Scene’s most famous songs?

Moseley Shoals, Ocean Colour Scene, Seasides & Freerides, Marcin’ Already, One From the Modern, Mechanical Wonder, Songs For the Front Row, North Atlantic Drift, Anthology, Live- One For the Road and many more.

Who are the band members currently in Ocean Colour Scene?

Where did Ocean Colour Scene form?

When did Ocean Colour Scene form?