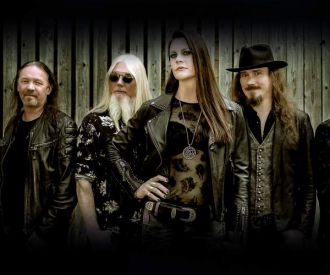 Originally hailing from Finland, symphonic metal band Nightwish are known for their high-occitane stage performances and unique sound. Although band members have changed over the years, Nightwish are made up of band members Tumoas Holopainen, Emppuu Vuorinen, Marco Hietala, Troy Donockley, Floor Jansen and Kai Hahto.

Nightwish formed in 1996 Kitee, Finland, Nightwish and rose to fame in their home country since the release of Angels First Fall (1997). Following the release of albums Oceanborn (1998) and Wishmaster (2000), Nightwish began to gain prominence in the international arena.

Nightwish really made their breakthrough with their incredibly successful album, Once (2004), which sold over one million copies. In the US, their hit single "Wish I Had an Angel" was a hit in the US and led to a huge North American tour. In September 2007, Nightwish released their sixth album, Dark Passion Play which sold almost 2 million copies. Their latest, and also highly acclaimed album, was Endless Forms Most Beautiful (2015).

In 2020, the Finnish heavy metal band are embarking on an extensive international tour! Visiting venues around the world, Nightwish are coming to Cardiff and London in December 2020. The band will be accompanied by special guests Turmion Kätilöt. Experience a high-energy, unforgettable evening of entertainment with Nightwish live in concert!

What are Nightwish’s most famous songs?

Nightwish’s most famous songs are the “Poet and the Pendulum”, “Ghost Love Score”, “Nemo”, “Amaranth”, “Wishmaster”, “Wish I Had an Angel”, “Storytime”, “Planet Hell”, “The Pharaoh Sails to Orion”, “Bye Bye Beautiful

What are Nightwish’s most famous albums?

What is Nightwish’s biggest hit?

Nightwish’s biggest hit is “Poet and the Pendulum”.

What is Nightwish’s best selling album?

Who are the band members of Nightwish?

Yes, Nightwish are going on tour in 2020 and visiting Motorpoint Arena Cardiff on December 16th and the SSE Arena Wembley on 18th December 2020.

Where did Nightwish form?

When did Nightwish form?

What style of music are Nightwish?