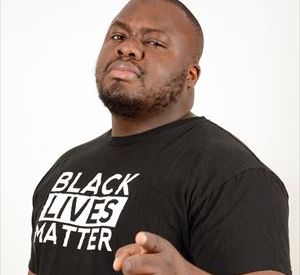 As the youngest ever black comedian to perform stand-up at the Hammersmith Apollo and the finalist in the NATY competition in 2013, Nabil Abdulrashid is undoubtedly one of the most up and coming comedians of the minute. Known for his energetic delivery and original but hilarious take on cultures, history and geopolitics, there is nothing like experiencing Nabil Abdulrashid live in concert!

Nabil Abdulrashid was born in London and raised in Nigeria to a medical doctor father and a businesswoman mother then was privately schooled in the UK. Abdulrashid started off his comedy career after entering the ‘Which Religion Is Funniest?’ competition and was put in the top 10 spot. Nabil Abdulrashid then went on to write, act and direct on The Show Sho Show which aired on Channel AKA. In 2020, Nabil Abdulrashid brought his new comedy show to Britain’s Got Talent and reached the final!

Nabil Abdulrashid has not only delivered several successful live stand up tours across Europe, Africa and the Middle East, but also made media appearances as both a comedian and social commentator on BBC2, BBC3, BBC Asian Network, Channel 4 and Al Jazeera English.

Following his success on Britain’s Got Talent 2020 on which he reached the final, Nabil Abdulrashid has announced a brand-new comedy stand-up show which begins in May 2021 and continues all the way through to October 2021.

Having received critical acclaim for his stand-up show and hilarious sense of humour, there is nothing like experiencing him live on stage. Grab your tickets now for a show somewhere near you!

Is Nabil Abulrashid going on tour in 2021?


Nabil is going on tour from May - October 2021 and visiting most major UK cities.


What style is Nabil Abdulrashid’s comedy?


Nabil Abdulrashid’s style of comedy is considered both satirical and surreal, often focusing on social and personal topics such as being a black Muslim in South London. He mixes the different languages he speaks into his material.

When did Nabil Abdulrashid begin his career?

Abdulrashid began his career in 2010 when he performed stand-up at the Hammersmith Apollo, entering the ‘Which Religion is Funniest?’ competition.

Did Nabil Abdulrashid win Britain’s Got Talent in 2020?


Nabil Abdulrashid did not win Britain's Got Talent in 2020 but he got to the final.

Nabil Abdulrashid has the Judges ROARING with LAUGHTER! | Semi-Finals | BGT 2020

Unapologetically FUNNY! Nabil Abdulrashid has the Judges in STITCHES! | The Final | BGT 2020