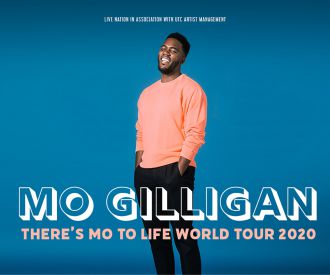 Known for his observational and simultaneously high-energy approach to Comedy, Mo Gilligan has enjoyed a meteoritic rise to fame and is considered one of the hottest comedians of the minute. Receiving a BAFTA nomination in 2019, the royal television society 2019 award and the NTA 2020 double nomination, Gilligan has become something of a global phenomenon.

Yet 2017 undoubtedly marks his breakthrough moment, when Canadian rapper Drake noticed his work and quoted it on his own Instagram account. From 2018, he has been co-hosting the obscenely funny Channel 4 The Big Narstie Show as well as hosting his own, extremely successful show, The Lateish Show with Mo Gilligan. Most recently, his smash-hit comedy netflispecial, Mo Gilligan: Momentum, was the no1-trending show and also earned him a BAFTA nomination.

Mo Gilligan Live at the Apollo