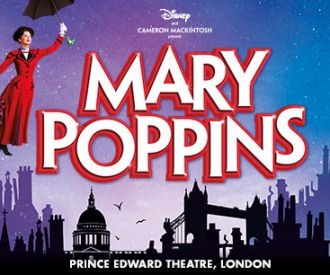 On the 23rd of October, the multi-award winning production of Mary Poppins returns to its West End home with its spectacular choreography, impressive effects and a Supercalifragilisticexpialidocious musical score. The infamous Mary Poppins will blow you away with this spell-binding musical production!

At 17 Cherry Street, The Banks family live a rigid life and Mr Banks wants to employ an equally strict nanny to discipline his children. Although Mary Poppins, their new nanny, has a stern exterior, she has all sorts of magic tricks up her sleeve!

Sliding up bannisters, floating in the air, talking to animals: what can Mary Poppins not do? Whilst making sure the children behave correctly, she also takes them on exciting magical adventures full of surprises! Unlike their distant and neglectful parents, Mary establishes a close and loving relationship with the children.

Capturing this heart-warming and well-loved storyline through a musical stage performance, Mary Poppins is an unforgettable theatrical experience which can be enjoyed by all ages!

Getting there: The Prince Edward Theatre can be accessed by Train, Tube Bus and Car. This is the full address:

Train: take the train to Charing Cross Station and then the theatre is about a 10-15 minute walk away.

Tube: alternatively you could take the tube from Charing Cross to the nearest tube stations; Leicester Square (approx 300m away) and Tottenham Court Road (about 400m away).

If you are planning on driving to the West End, we recommend that you use the Q-Park Theatreland Parking Scheme which will save you 50% off car parking after 12pm for up to 4 hours. You must present Q-Park car park ticket for validation at our box office. Discount codes do not apply to the pre-booking service

You can also park at Meters at Soho Square (about 200m) and NCP Brewer Street.

The Prince Edward Theatre is within the London Congestion Charge Zone. This costs £11.50 between 7am and 6pm, with travel costs outside of these hours free. Drop offs are permitted outside of the theatre on Old Crompton street.

There is one parking space available for visitors with a disabled badge.

Headsets are available for a refundable £5 deposit

Guide dogs are allowed into the auditorium or the staff are happy to look after the dogs.

The Entrance to the Auditorium is through a double EXIT door opening outwards on Greek Street, then up a very short ramp to Box 1 where there are 2 spaces for wheelchair users and 2 companions. Transfer seating is available on row A. The theatre can store wheelchairs and scooters but only a maximum of 2 per performance, next to the EXIT door.

There are men’s and women’s toilets at all levels.

There is an adapted toilet which you can access on the right hand side of the foyer. Those who require an adapted toilet need to go out of the exit on to Greek Street and back to the foyer entrance on Old Compton Street. If required, staff are very happy to assist.

There are 5 bars at the Prince Edward theatre and staff can bring drinks to disbaled customers. The Mozart Bar is in the foyer at street level, the Dress Circle Bar is up 27 steps and the Stalls bar in down 46 steps. There is also a Soft Drinks bar down 24 steps at Stalls level and a further bar at Grand Circle level.

The Prince Edward Theatre is a large and exquisite theatre with an impressive capacity of 1644 seats.There are 858 seats available in the Stalls, 389 seats in the Dress Circle and 397 seats in the Grand Circle. Ticket prices range from £24 to £179.

The Stalls: providing some of the best views in the theatre and perhaps the most intense theatrical experience, the stalls are located nearest to the stage. While the prices of tickets in the stalls vary, there are cheaper tickets located at the back of the stalls.

The Dress Circle: located just above the stalls, some of the best seats in the whole theatre can be found here; rows B-D, seats 15-9. If you are looking for cheaper tickets, you buy them in the lodges next to the Dress Circle.

The Upper Circle: as the highest seats in the house, the upper circle seats can have amazing views. Some of the cheapest tickets in the theatre can be at the top of the Upper circle or in the lodges beside it.

To book call the box office on 08444825100 or email groupsales@delfontmackintosh.co.uk

Subject to availability, discounts are offered to disabled theatre-goers and one companion, including wheelchair users and Patrons who have specific access requirements.

Access bookings and further information can be requested by calling 03444825137 or emailing access@delfontmackintosh.co.uk

Throughout 2019 and 2020, Mary Poppins will be showing at the Prince Edward Theatre Wednesday (Family Night) at 7pm, Thursday-Monday at 7.30pm and on Thursday, Saturday and Sunday at 2.30pm.

The performance schedule may change from the 23rd of October - 25th of November 2019.

Who is Mary Poppins the Musical cast?

How long is Mary Poppins the Musical?

What is Mary Poppins the Musical about

Mary Poppins the Musical follows the story of a magical nanny who looks after the children in the Banks family. With plenty of tricks up her sleeve, she delights the children and also forms a close and loving relationship with the neglected children.

What are the main songs in Mary Poppins the Musical?

Is Mary Poppins the Musical going on a UK tour?

No, Mary Poppins the Musical is not going on tour and visiting the cities of Manchester, Birmingham, Bristol, Edinburgh and Glasgow.

Where is Mary Poppins the Musical showing in London?

Mary Poppins the Musical is showing at the Prince Edward Theatre, London.

Who wrote Mary Poppins the Musical?

Mary Poppins the Musical was produced by Cameron Mackintosh and Disney.

Who directed the West End version of Mary Poppins the Musical?

When did Mary Poppins the Musical first premiere?

Mary Poppins the Musical premiered on Broadway on the 18th September, 2004.