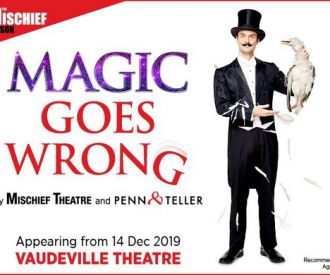 The legendary Mischief Theatre (The Play That Goes Wrong, The Comedy About A Bank Robbery, Peter Pan Goes Wrong) have collaborated with hilarious magic duo Penn and Teller to bring you Magic Goes Wrong; a hilarious evening of world class, magical entertainment!

Magic Goes Wrong follows the story of an accident-prone group of magicians who are fundraising for a charity event. However, as the title suggests, their fundraising magic show does not go according to plan...

As the next ‘Go Wrong’ comedy in the Mischief theatre’s series, Magic Goes Wrong follows suit in capturing the company’s side-splitting, slapstick sense of humour. Having enjoyed sell-out shows in the UK and the US, Magic Goes Wrong tickets are expected to go fast so grab them while you can.

Magic Goes Wrong ticket prices start at £24 and premium tickets are £90. The Vaudeville theatre has a capacity of 690 seats and it is divided into the Stalls, the Dress Circle and the Grand Circle. The best seats in the house can be found in the middle of the Stalls and at the front of the Dress Circle.

If you are looking for more reasonable tickets, these can be found in the Grand Circle; the section of the theatre furthest away from the stage. However, there are still reasonably priced tickets at the back of the Stalls and Dress Circle.

If you are a group of 10 or more, you can enjoy a group ticket discount. The Deal is valid Thursday -Sunday evening performances. Stalls and Dress Circle is reduced to £29.50. However, exclusions apply; the deal is not valid on premium seats.

This deal is valid Tuesday- Thursday evenings £19.50 (1 FREE ticket for every 10 booked for schools).

Tube: if you are travelling to the theatre by tube, the nearest tube station is station is Charing Cross (Northern, Bakerloo lines) or Embankment (District, Circle lines)

Train: if you are travelling by rail, the nearest train station is Charing Cross.

Car: The theatre is part of the Q-Park Theatreland Parking Scheme; show your car park ticket for validation at the box office and the car park machine. The nearest car park is NCP at Upper St Martins Lane Master park at Trafalgar Square.