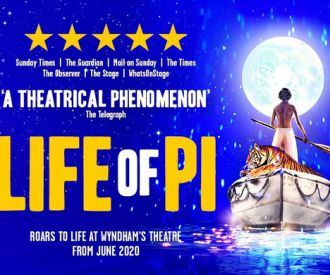 Tickets for Life of Pi

Having enjoyed an extremely successful run at Sheffield Theatres in June 2019, the Olivier Award nominated production of the Life of Pie comes to the West End with extraordinary life-sized puppetry, spectacular set designs and a storyline which has entralled audiences all over the world. Based on Yann Martel’s best-selling novel,the Life of Pie follows a young man’s spiritual journey after he is stranded on a lifeboat in the middle of the Pacific ocean with a zebra, a hyena, an orangutan and a bengal tiger.

Adapted by Lolita Chakrabarti and directed by Max Webster (Old Vic Theatre: The Lorax; Shakespeare’s Globe: Much Ado About Nothing), the Life of Pie is a truly captivating performance which explores the themes of faith, friendship and resilience in this incredible fight for survival. Buy your tickets now for this expected sell out show!

Whilst moving to Canada with his family by ship, Pi-Patel, a South-Indian teenager, is the sole survivor of an inexplicable ship accident. Stranded in the middle of the Pacific Ocean on a lifeboat, Pi finds himself with a hyena, an orangutan and a magnificent bengal tiger, Richard Parker.

Fighting for survival, the animals die one by one until Pi is left alone with Richard Parker. Not only is this epic story a test of Pi’s perseverance, but also his faith in God whilst he is trapped in this delusory world in the middle of the Pacific Ocean.

Tube: if you are travelling by tube, the nearest station is Leicester Square, which is right next to the theatre.

Train: if you are travelling by train, the closest train station is Charing Cross, which is approximately 200m walk from the theatre.

Car: You can enjoy 50% off parking with the Q parking scheme after 12pm and for up to 4 hours. Show your Q-Park car park ticket for validation at the box office. You can also park at MasterPark at Cambridge Circus and NCP at Bedfordbury and Upper St Martin’s Lane.

There are discounts available for theatregoers and one companion. Call the theatre now on 03444825137 or email access@delfontmackintosh.co.uk. Drinks can be taken to customers during the performance.

There is a full Infra-red system with 20 headsets available. You can collect them from the cloakroom.

Guide Dogs are welcome in the theatre and staff are also happy to look after them during the performance.

There is one adapted toilet in the Accessible box with one step down upon entry.

There are 2 spaces in Box A and therefore a maximum of 2 wheelchair user patrons per performance. There is no lift and access is 21 steps down to Stalls, 23 to Royal Circle, 40 to Grand Circle, 96 to Balcony.

How long is the Life of Pi the play?

The Life of Pi the play is 2 hours 5 minutes long (including interval) .

What is the Life of Pi the play about?

The Life of Pi the play, which was originally a book by Yan Martel, follows the extraordinary story of a young indian boy, Pi-Patel, who is travelling on a cruise ship with his family to Canada. Following a ship accident, Pi-Patel finds himself stranded in a tiny wooden boat with a zebra, a hyena, an orangutan and a tiger, Richard Parker. An epic fight for survival, the Life of Pi is depicted using incredible puppetry.

Who is in the Life of Pi the play cast?

Where is the Life of Pi the play showing in London?

The Life of Pi the play is showing at the Wydnham’s Theatre in London.

Who adapted the Life of Pi into a play?

Who directed the Life of Pi the play?

Max Webster directed the Life of Pi the play.

Who wrote the Life of Pi the novel?

Yan Martel wrote the bestselling novel of the Life of Pi.

When did the Life of Pi the play first premier?

The Life of Pi the play first premiered at Sheffield Theatres in June 2018.

Is the Life of Pi the play going on tour?

No, the Life of Pi the play is not going on tour and visiting the Uk cities of Manchester, Birmingham, Glasgow, Edinburgh, Bristol, Sheffiled and Leeds.

Photos of Life of Pi 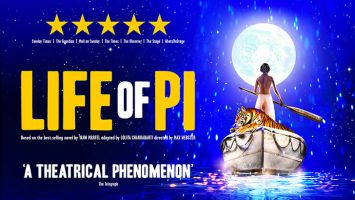 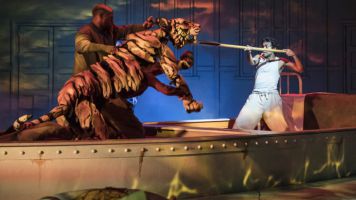 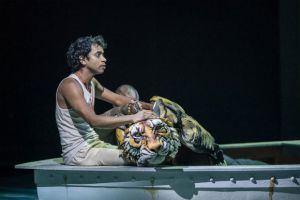 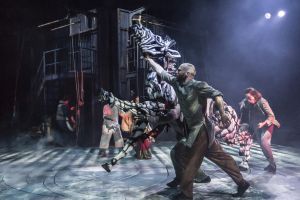 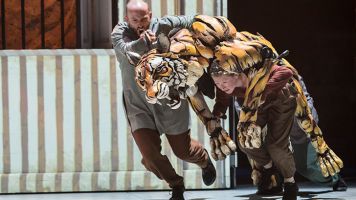 Ticket prices for Life of Pi