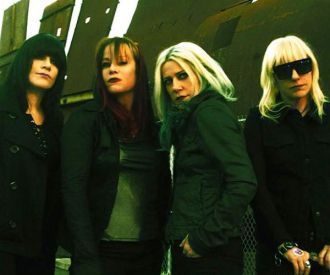 Known for their dynamic sound rooted in punk rock and alternative metal, L7 are a powerful rock band Consisting of band members Donita Sparks, Suzi Gardner, Jennifer Finch and Demetra Plakas, L7 are known for their subversive and humorous spirit and the band’s name, L7, derives from the slang term for square and was chosen to be a gender neutral sign.

After forming in 1985, L7 released their self-titled debut album in 1988 which was shortly followed by the ‘Smell of Magic’ (1990) and Bricks Are Heavy (1992) which hit #24 in the UK albums Chart. The band then went on to release several other successful albums including ‘Hungry for the Stink’ (1994) and ‘The Beauty Process: Triple Platinum (1997).

Taking a brief hiatus in 2001, L7 reunited in 2014 and performed a legendary concert at Download Festival in 2015 and went on to sign with Don Giovanni, releasing their first new album in 18 years, ‘Scatter the Rats’ (2019) which was met with international acclaim.

What are L7's top albums?

What are L7's biggest hits?

L7's biggest hits include Pretend We're Dead, Andres, Shitlist, Fast and Frightening, Shove, Til the Wheels Fall Off, Fuel My Fire, Everglade, Wargasm, Deathwish and the Masses Are Asses.

When did L7 form?

What style of music are L7?

Where is L7 from?

L7 are from Las Vegas.

Is L7 going on tour?

Yes L7 are going on tour in 2021 including dates such as London Electric Ballroom on 26th June 2021, Manchester Academy on 27th June 2021, Glasgow Saint Lukes on 28th June 2021 as welll as other  international dates.

When did L7 take a hiatus?