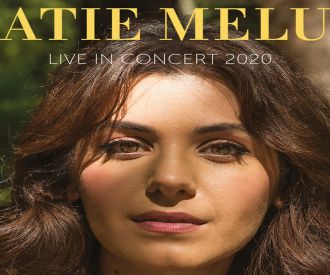 Considered one of Britain’s most successful recording artists of the millennium, the multi-award winning Katie Melua is celebrated for her unique style blending jazz, pop music and blues. The Georgian-born artist’s awards include Best International Newcomer in 2005 for the ECHO awards, Best Pop International Solo for the 2007 Goldene Kamera awards and Best International Female Artist for the 2007 Echo Awards as well as several Brit Award nominations.

Born in Georgia, Katie Melua migrated to Belfast in 1993 with her family when she was eight years old. Following this, she moved to London with her family and after completing her GCSE’s, she attended the BRIT School For Performing Arts in the London Borough of Croydon.

In September 2002, Melua signed to Matt Batt’s own label Dramatico Records, and released her first album, Call of the Search, in November 2003, which reached top of the UK’s charts and sold 1.8 million copies. She then went on to release her successful second album, Piece by Piece in 2005, which has enjoyed going platinum four times, as well as her third studio album, Platform, in October 2007. For her fourth album, The House, which Melua released in 2010, she collaborated with William Orbit.

Having enthralled audiences around the world, Melua has performed at several festivals and enjoyed many sell-out tours. Melua has taken the stage for extraordinary moments in her career, such as playing on stage for Nelson Mandela with her ultimate idols, Queen.

In 2020, Katie Melua has announced an extensive international tour! Visiting over 13 countries, Katie Melua can be enjoyed live in concert at venues around the UK. Since 2003, Melua has been wowing the world with her spectacular sell-out concerts and has not lost her touch. Tickets are expected to be in high demand, so book them in advance to avoid disappointment!

Is Katie Melua going on tour?

Yes, Katie Melua is going on an international tour in 2020 and visiting the UK cities of Oxford on the 17th November and Torquay on 19th November as well as several other locations.

What are Katie Melua’s top songs?

Katie Melua’s top songs are “Call Off the Search”, “Crawling Up A Hill”, “Nine Bicycles”, “The Closest Thing to Crazy”, “I Cried For You/Just Like Heaven”, “Spider’s Web”, “It’s Only Pain”, “If You Were A Sailboat”, “What a Wonderful World” with Eva Cassidy.

What is Katie Melua’s biggest hit?

What are Katie Melua’s albums?

Katie Melua’s albums are Call Of The Search, Piece By Piece, Pictures, The Collection, The House, Secret Symphony, Ketevan and In Winter.

Where is Katie Melua from?

Katie Melua is originally from Georgia and moved to Belfast in 1993.

What genre of music does Katie Melua make?

How many awards has Katie Melua won?

Where did Katie Melua go to school?

Following her GCSE’s Katie Melua went to the BRIT School for Performing Arts in Croydon.

When did Katie Melua’s career take off?

Katie Melua’s career took off in 2002 when she was signed to Matt Batt’s own label Dramatico Records.

Katie Melua - I Will Be There (Full Concert Version) - Official Video