Warning: Invalid argument supplied for foreach() in /furanet/sites/best-tickets.co.uk/web/htdocs/app/_i18n.php on line 287
 Tickets for Jimmy Carr - Terribly Funny 2022 | Best-tickets.co.uk
Find the best price on Best-tickets.co.uk
Compare prices between 40 official ticket vendors and five resale platforms (where prices may be higher or lower than the price on the ticket). 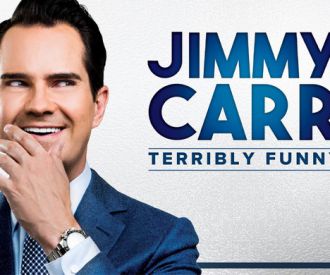 Renowned for his deadpan humour which constantly pushes the boundaries, Jimmy Carr, whose full name is James Anthony Patrick Carr, has won multiple awards for his outrageous stand-up and television performances. Crowned by the Observer as one of Britain’s funniest acts and polled 12th in a readers poll of the 100 Greatest Stand Ups, Jimmy Carr is undoubtedly one of the UK’s most prominent and successful comedians!

After taking voluntary redundancy from his marketing role, Jimmy Carr, who attended the University of Cambridge, began his comedy career in 2000 and quickly started performing paid gigs. Nominated for the coveted Perrier Award at Edinburgh Festival Fringe for his incredible show, Bare Faced Ambition. Jimmy Carr has since performed multiple stand-up shows, having won the British Comedy Award for Best Live Stand Up!

In 2016, Jimmy Carr performed Funny Business which was filmed at London’s Eventim Apollo in Hammersmith and was streamed on Netflix, making him the first UK comedian to record a Netflix special. Alongside his multitude of best-selling stand-up shows, Jimmy Carr has hosted several prestigious television shows, including Out of 10 Cats, Big Fat Quiz of the Year and Distraction, as well as making guest appearances on Have I Got News For You.

From January 2022, Jimmy Carr is performing his award-winning show Terribly Funny and visiting most major UK cities across the UK. Expect jokes consisting of all kinds of terrible things and grab your tickets now to experience one of the UK’s most hilarious and outrageous comedians live on stage!

What are Jimmy Carr’s previous stand up shows?

Where is Jimmy Carr from?


Jimmy Carr is from Hounslow.


When did Jimmy Carr begin his career?

Which awards has Jimmy Carr won?

What is Jimmy Carr’s style of humour?