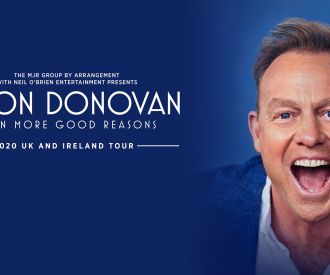 A multi-talented and versatile artist, actor and musical theatre performer, Jason Donavon has been enthralling audiences for decades with his musicals, sell-out concert tours and extensive presence on Australian television.

Originally from Melbourne, Australia, Jason Donavon first made his mark with his role as Scott Robinson on the popular Australian soap, Neighbours. Winning a plethora of Australian awards, including ‘Most Popular Actor’, his role in Neighbours was met with international acclaim.

In 1989, Jason Donavon turned his attention to music, and his 1989 debut album, ‘Ten Good Reasons’ achieved 13 million sales and 4 UK No1s. Following this, Jason went to star in a multitude of musicals, such as Joseph and The Technicolour Dreamcoat, The Rocky Horror Show and Chitty Chitty Bang Bang. He has also headlined several sell-out concert tours, including his 2016 Ten Good Reasons tour, for 8 years.

In autumn 2020, Jason Donavon is embarking on a stellar UK and Ireland tour featuring 52 dates. His first musical tour in ages, expect Donavon’s greatest hosts performed with Donavon’s incredible energy and talent. Grab your tickets now for an unforgettable evening of entertainment!

Jason Donovan - Every Day (I Love You More) - Official Video