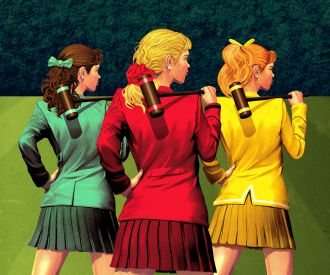 Tickets for Heathers The Musical

After enjoying two record-breaking West End runs, the critically acclaimed Heathers the Musical embarks on its first much-anticipated UK tour! Based on the eponymous 1988 film, Heathers the Musical features a catchy musical score, spectacular dance routines and an unforgettable storyline which explores prevalent teenage issues which can resonate with audiences universally.

Set in the fall of 1989, Veronica Sawyer is about to start her senior year and cannot wait to escape to college life. In her diary, she surveys the way her classmates interact with each other. Veronica is particularly fascinated by the Heathers: the three of the most popular girls in the year who truly rule the school..

Produced by Bill Kenwright and Paul Taylor Mills, Heathers the Musical will transport you to the turbulent yet hilarious corridors of American highschool and be an unfogettable theatrical experience!

Tickets for Heathers the Musical may vary depending on the venue, however ATG tickets are mostly standardised:

Is Heathers the Musical going on tour?

Yes, Heathers the Musical is going on tour and visiting the Liverpool Empire from the 2nd-5th January, Glasgow's Kings Theatre from 12th-16th January, Edinburgh Playhouse from 19th-23rd January, Theatre Royal Bristol Hippodrome from the 2nd-6th February and the Sunderland Empire 9th-13th March.

What is the Heathers the Musical running time?

The running time is 2 hours 30 minutes.

What is Heathers the Musical about?

The Heathers are the most popular girls in school and in her senior year, Veronica, who cannot wait to escape college life is fascinated by them. The musical follows their escapades and how they manage to successfully rule the school.

Who wrote Heathers the Musical?

Who is in the cast of Heathers the Musical 2021?

The cast has not yet been announced.

What songs are in Heathers the Musical?

Who created this version of Heathers the Musical?

Heathers the Musical was created by Bill Kenwright and Paul Taylor Mills.

Photos of Heathers The Musical

Heathers The Musical
+ info
Several locations
No events
-
Follow
Why?