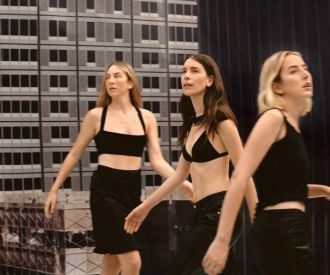 A band of three talented sisters, Este Haim, Danielle Haim and Alana Haim, American pop-rock band Haim have become one of the most renowned LA bands of their generation. Known for their soulful sound rooted in R&B, Este is mainly on the bass and vocals, Danielle take the lead on vocals, guitar and drums and Alana is proficient at guitar and keyboard, yet all members can play all instruments.

Growing up in a musical family, the sisters could proficiently play a range of musical instruments from an early age. In 2005, the two elder sisters, Este and Danielle, began performing with the pop group Vailli Girls, but left shortly after they were on the Nickelodeon Kids’ Choice Award. The three sisters formed Haim along with youngest sister Alana in 2007.

Following their successful first release Forever, Haim went onto sign a deal with Polydor Recordsand their first album, Days Are Gone, was charted in the top ten in several countries. Since then, the band have enjoyed international acclaim and have performed at the likes of Glastonbury festival.

Who is in Haim?

What are Haim's biggest hits?

Haim's biggest hits include  No Body, No Crime, Gasoline, Pray to God, the Wire, Summer Girl, Now I'm On It, The Steps, Don't Wanna and many more.What

What are Haim's albums?

Where are Haim from?

Haim are from Los Angeles.

When did Haim form?

What genre of music are Haim?

Have Haim won any awards?

HAIM - Want You Back (Official Video)