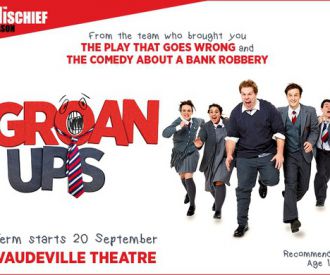 1NOTE: approximate address. The only address that is completely valid is the one shown on the tickets
1
Follow
Why?

As the hugely successful Mischief Company’s first new play since 2016, (The Play That Goes Wrong, Peter Pan Goes Wrong) Groan Ups is a fun and hilarious insight into the pain and embarrassment we experience during adolescence. Laugh out loud at this wildly funny and relatable comedy now!

With slapstick humour and obvious sexual innuendos, the storyline begins with a group of friends in an oversized Year 2 classroom, where the audience learns about their families and character traits. The plot then fast-forwards to the noughties, where we meet their drunken, 14-year old-selves, who are absorbed by the angst of high school. Finally, at the end of the comedy, the friends meet for a school reunion in their thirties to reminisce.

With the Mischief company’s absurd, belly-rolling humour throughout, Groan Ups will resonate with audiences at each stage of the character’s lives and be an unforgettable theatrical experience!

What were the Mischief Theatre gang like at school? | Groan Ups in the West End

Usuario Taquilla
Good I thought this production was really funny! The Mischief Theatre always does an amazing job of making me laugh with its absurd sense of humour! I recommend this production to anyone.