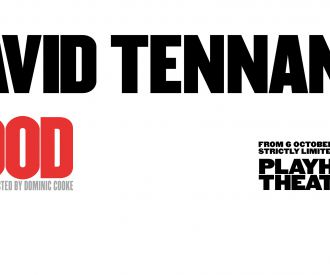 With direction from the Olivier- award winning Dominic Cooke and starring critically acclaimed actor David Tentant, Good is expected to take the West End by storm for a limited time only at the Playhouse Theatre! Having enjoyed several outstanding performances in shows both on the stage (Don Huan in Soho, Hamlet, Much A Do About Nothing) and on screen (Doctor Who, Mary Queen of Scots, You Me & Him, Harry Potter and the Goblet of Fire), award-winning actor David Tenant will not disappoint!

Good follows the story of John Halder, a decent, intelligent man who has to adapt to survive in Nazi Germany. Written by C.P Taylore, Good was first commissioned by the Royal Shakespeare Company in 1981. A powerful, unforgettable revival of a play which is in many ways relevant to our current political climate, Good tickets are expected to be in high demand so grab your tickets while you can!

John Halder, a talented, liberal-minded, music-loving professor, lives in Nazi Germany and is best friends with Maurice, a Jewish man  Adapting his ways to simply survive Nazism, Halder finds himself being seduced into a regime which goes against everything he stood for and his actions escalate dramatically...

Good tickets start at £23 and are as expensive as £162.50. The Playhouse Theatre is divided into the Stalls, the Dress Circle and the UpperCircle.

If you are looking for the best seats in the house, which are also the most expensive, these can be found in the mid-centre of the Stalls and the Dress Circle, which provides excellent views of the stage.

If you are looking for cheaper tickets, then these can be found at the back of the Dress Circle and the Upper Circle, where there are slightly restricted views of the stage but you can still enjoy an incredible theatrical experience.

Train: the closest train station to the theatre is Charing Cross Station, which is only a 5 minute walk away from the Playhouse Theatre.

The Stalls is the most accessible section of the theatre, which are step-free from the foyer to seating. The wheelchair spaces are located in Row G and J and there is space for