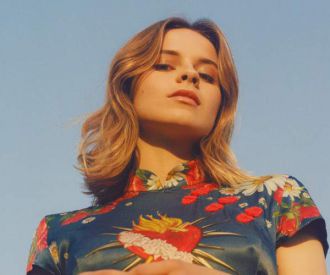 Celebrated for her hit cover of Frankie’s “The Power of Love” which featured in the top of the UK Singles Chart and was selected to record the soundtrack for a John Lewis television commercial, Gabrielle Aplin has become a popular artist in the UK folk and indie music scene.

Gabrielle Aplin rose to prominence for her music covers on Youtube which led to signing a record deal with Parlophone in February 2012. She then went onto release her debut album, English Rain, which she released in 2013 and has since been certified Gold in the UK for which she achieved over 10,000 copies.

Following this, Aplin has released her second album, Light Up the Dark and then her third album, Dear Happy, in 2020. Known for her gentle, spine-tingling vocals and self-taught piano and guitar, Gabrielle Alplin has enthralled audiences with her incredible live performances.

Due to the coronavirus outbreak, Gabrielle Alplin has not been able to tour and support her most recent album, Dear Happy, which she released in 2020. Experience Gabrielle Aplin live in concert with her impressive vocals and unique, folk sound!

What are Gabrielle Aplin's biggest hits?

Gabrielle Aplins's biggest hits are her cover of the "Power of Love", "Please Don't Say You Love Me", "Panic Chord", " Home", "Salvation".

What are Gabrielle Aplin's main albums?

What style of music is Gabrielle Aplin?

Gabrielle Aplin's style of music is rooted in folk and indie.

Where is Gabrielle Aplin from?

Gabrielle Aplin is from Chippenham, Wiltshire.

When did Gabrielle Aplin begin her career?

Gabrielle Aplin began her career inn 2012 when she signed a recording deal with Parlophone in February. She became famous on Youtube.

What other instruments can Gabrielle Aplin play?

Gabrielle Aplin can also play the guitar and the pinao which she taught herself.

What is the name of Gabrielle Aplin's first album?