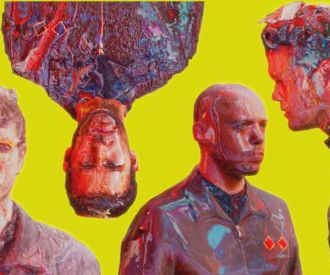 Expertly intertwining pop, contemporary RnB and a touch of punk, quartet Everything Everything emerged as a major indie pop band a decade earlier and are still producing a creative, modern sound. Consisting of band members Jonathan Higgs, Jeremy Pritchard, Michael Spearman and Alex Robertshaw, Everything Everything have twice been shortlisted for a Mercury Music Prize and have received five nominations for Ivor Novello Awards.

Original band members Johnathan Higgs, Alex Niven and Michael Spearman attended school together in Hexham, Northumberland. Years later, they formed Everything Everything in Portsmouth along with Jeremy Pritchard and are now based in Manchester. The band broke into the UK music scene in 2007 with the release of their debut single, Suffragette, Suffragette in 2008.

Everything Everything really rose to fame in 2009 with the release of their best-selling track MY KY UR BF which earned them a place on the BBC Sound of 2010 longlist. The band then went onto release their full-length debut Man Alive in 2010 followed by several successful albums including Arc (2012) and Get to Heaven (2015), which focused more on current socio-political issues. Everything Everything then released their fifth album, Re-Animator, in 2020 which features singles Birdsong and Arch Enemy.

Following the successful release of their 2020 album Re-Animator, Everything Everything have announced an extensive UK tour in 2021 and 2022 around the UK and are visiting cities such as Leeds, Bristol and Birmingham. After having to cancel many previous tour dates, the group are back to put on a show you won’t forget!

Everything Everything’s awards include being shortlisted for a Mercury Music Prize and have received five nominations for Ivor Novello Awards.


Band members Jonathan Higgs, Alex Niven and Michael Spearman went to school together in Hexham, Northumberland and are now based in Manchester.


Everything Everything’s genre of music is considered pop, contemporary RnB and an element of punk.

Everything Everything - Mercury and Me (Official Video)

Everything Everything
+ info
Tramshed (Cardiff)
View map
Price from:
£22.50
Follow
Why?