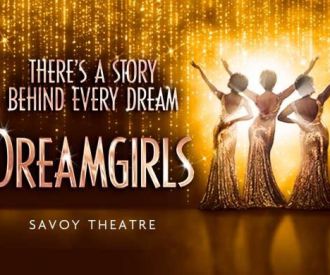 Nominated for 13 Tony awards and the winner of 6, including Best Book, Best Choreography, Best Actor and Best Actress in a Musical, DreamGirls has become one of the world's must-see musicals. The London version of DreamGirls opened at the Savoy Theatre on 14 December 2016, courtesy of Sonia Friedman who bought the rights to produce the show in London. A runaway success that will soon be coming to an end. But if you run you can still catch it!

During the turbulent decade of the sixties, Effie, Deena and Lorrell are three talented singers who dream of making a niche for themselves in the world of musicals. A dream that will come true when their R&B band, The Dreamettes, is discovered by Curtis Taylor Jr., a ruthless manager who makes them an offer they can’t refuse - backup singers for James Early, one of the most popular singers of the time. Intent on becoming famous, Taylor will take control of the band, until the girls realize the price they have had to pay for the fame and fortune they dreamt of.

DreamGirls takes to the stage of the Savoy Theatre in London from Monday to Saturday at 7:30pm. There are matinees on Wednesdays and Saturdays at 2:30pm.

How much do DreamGirls tickets cost?

The minimum price for tickets ranges from 21 pounds on Mondays to Thursdays and 30 pounds on Fridays and Saturdays. On average, a good visibility seat will cost around 70 pounds, though the best tickets in the premium area can cost up to 200 pounds.

Ticket prices change depending on how far in advance you book your tickets and on the date you want to see the show on. Normally the most economical performances are the ones on weekdays, specifically the matinee sessions.

If you are under 25 you can buy tickets for the Tuesday performances at 25 pounds using the code UNDER25.

Discounts are also available for groups of more than 10 people.

Dreamgirls at the Savoy Theatre

Located in the heart of the West End in London, the Savoy Theatre was inaugurated on October the 10th, 1881. Curiously enough, this venue is famous for being the first building in the entire world to be completely lit by electricity. The Savoy Theatre currently has a capacity of 1,128 people, distributed as follows: 519 in the Stalls, 347 in the Dress Circle and 262 in the Upper Circle.

How can I get to the Savoy Theatre?

The Savoy Theatre is registered in the Q-Park’s Theatreland Parking Scheme, with which you will be able to enjoy a discount of up to 50% on your parking fee. All you have to do is present your theatre ticket at the cash-desk in the car park physical or at the payment machines, and your discount will be applied automatically. The closest car park to the theatre is the Q-Park Covent Garden, just 5 minutes away.

How long is Dreamgirls the Musical?

Who is in Dreamgirls the Musical cast?

The Dreamgirls 2020 cast is yet to be announced.

Is Dreamgirls the Musical going on tour?

What is Dreamgirls the Musical about?

Dreamgirls the Musical is about three talented singers, Effie, Deena and Lorrell, who dream of making it in the world of musicals as an R&B band, the Dreamettes. However, Taylor, a hardline manager, takes control of the bands offers for them to be backup singers for popular singer, James Early.

What songs are in Dreamgirls the Musical?

Where is Dreamgirls the Musical playing in London?

Dreamgirls the Musical is not playing in London.

How many Tony awards has Dreamgirls the Musical won?

Dreamgirls the Musical has won six Tony Awards. It has also been nominated for 13 Tony Awards.

When did Dreamgirls the Musical first premiere?

Dreamgirls the Musical premiered in December 1981.

Who wrote Dreamgirls the Musical?

Dreamgirls the Musical was Henry Krieger and Tony Eyen.

Dreamgirls at The Alexandra Theatre, Birmingham