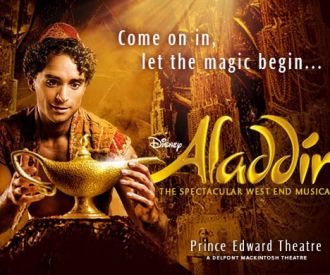 Immerse yourself in exotic Arabia with Aladdin the musical, which brings the magic and excitement of the legendary Disney creation to London. First released in 1992, the animated film became an icon of 90s cinema for children and adults alike as a result of its plot and a spectacular soundtrack that marked an era.

Now, the genie has left the big screen to give life to a musical that is triumphing worldwide. Ready to experience Agrabah in the flesh?

Young Aladdin is a petty thief trying to survive on the streets of Agrabah. In a life replete with contrasts, it isn’t easy to fill your stomach. On one of his incursions to get bread, young Aladdin is arrested and locked in prison, where he meets a mysterious old man.

Together, they manage to escape. They go to rob the Cave of Wonders, a place that contains all the riches imaginable. The old man, Aladdin and Aladdin’s monkey, Abu, manage to get inside the cave, but a land movement caused by the greedy monkey makes the cave fall in. Aladdin finds himself trapped inside. But then something unexpected happens: a magic lamp, home to a genie, who grants the master of the lamp three wishes.

So, Aladdin manages to escape and meet Jasmin, a young princess, desperate to see the world beyond the walls of her palace. She categorically refuses to accept the arranged marriage her father has agreed with Jafar, who is no other than the old man from the prison and who also wants to get his hands on the lamp. Will Yasmin fall in love with young Aladdin? Will Jafar get away with his sinister plans? And what about the genie of the lamp? Will he ever be free? Find out for yourself!

*Note: you can frequently find last-minute special offers. Don’t stop searching for tickets for forthcoming weeks, in case you manage to find your seat at a lower price than usual.

Aladdin at the Prince Edward Theatre

The Prince Edward Theatre is one of the largest and best-known theatres in the West End of London. Built nearly 90 years ago, its address is: Old Compton St, London W1D 4HS.

Accessibility varies depending on where you want to sit.

The most affordable performances take place from Monday to Thursday, and you can find the cheapest seats in the grand circle. Sometimes, isolated seats are left unsold in other zones and their price is reduced.

The Aladdin musical sometimes offers discounts when you buy your tickets, particularly the renowned last-minute offers. You can get a seat from just £25. Keep an eye on our website to find out about them all.

The first performance of the musical was on 15 June 2016 in the West End and, since then, no one has been disappointed. Its spectacular set design and legendary songs mean that everyone who goes is surprised and promises they'll see it again one day. What’s the best thing about Aladdin the musical? The music of Alan Menken (The Little Mermaid, Beauty and the Beast and Pocahontas), with lyrics by Howard Ashman, Tim Rice and Chad Beguelin. During the show, the audience gets to enjoy the songs that made this an unforgettable Disney film in its day, including “Arabian Nights”, “One Jump Ahead”, “Proud of Your Boy”, “These Palace Walls”, “A Million Miles Away”, “Diamond in the Rough”, “Friend Like Me”, “A Whole New World”, “High Adventure”, “Somebody’s Got Your Back” and “Prince Ali”.

How long is Aladdin the Musical?

Where is Aladdin the Musical showing in London?

Aladdin the Musical is not currently showing in London.

What is Aladdin the Musical about?

Based on the award-winning Disney film, Aladdin the Musical follows the story of the pauper Aladdin. After being granted a wish by a genie, Aladdin takes princess Jasmine on his magic carpet who wishes to marry him and not get into his arranged marriage.

Which songs are in Aladdin the Musical?

Some of the most famous songs in Aladdin the Musical are “Arabian Nights”, “One Jump Ahead”, “Proud of Your Boy”, “These Palace Walls”, “A Million Miles Away”, “Diamond in the Rough”, “Friend Like Me”, “A Whole New World”, “High Adventure”, “Somebody’s Got Your Back” and “Prince Ali”.

Who wrote Aladdin the Musical?

When did Aladdin the Musical first show?

Aladdin the Musical first showed in 2011.