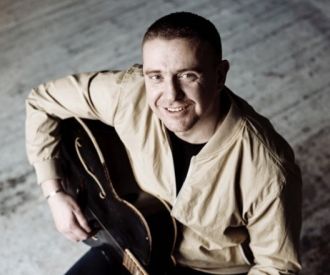 Damien Dempsey is celebrated for his fusion of traditional Irish folk and engaging lyrics which are often considered a social commentary, singing about issues such as the positive and negative aspects arising from Ireland’s Celtic Tiger society. Dempsey is known for singing adeptly in both English and Irish!

Originally from Donaghmede, a Northside suburb of Dublin, Damien Dempsey is an ex-boxer and is known for his soulful, poetic lyrics, having been influenced by the likes of Christy Moore, Since Dempsey launched his career in 2000 with his first album “They Don’t Teach This Shit in School”, Dempsey has released eight albums in total, such as Seize the Day (2003,), To Hell or Barbados (2007) and Almighty Love (2012) which have been met with critical acclaim.

Winner of several awards including the Meteor Music Awards for Best Folk/Traditional Act in 2004, 2006, 2007, 2008 and 2009, Damien Dempsey is undoubtedly a unique and talented artist who has enthralled audiences with his live stage productions.

Damien Dempsey has announced an extensive international tour in 2022 which has been rescheduled due to the coronavirus pandemic, visiting London, Belfast and multiple locations in Ireland. Expect some old classics from Dempsey as well as hits from his newer albums such as Almighty Love.

What are Damien Dempsey's biggests hits?

Damien Dempsey's biggest hits include Colony, The Rocky Road to Dublin, A Rainy Night in Soho, Sing All Our Cares Away, Apple of My Eye,Patience, the Auld Triangle and It's All Good.

What are Damien Dempsey's albums?

Where is Damien Dempsey from?

Damien Dempsey is from Donaghmede, Dublin.

When did Damien Dempsey begin his career?

Damien Dempsey began his career in 2001 with the release of his first album.

What genre of music is Damien Dempsey?

What is the name of Damien Dempsey's first album?

Damien Dempsey's first album is called They Don't Teach This Shit in School (2000).

Which awards have Damien Dempsey won?