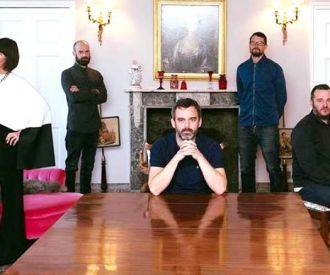 Intertwining underground disco, deep house and funk, Crazy P are an electronic music group who produce a unique, diverse sound. The group, which is made up of members Chris Todd, James baron, Danielle Moore, Tim Davies and Matt Close, regularly play both live and DJ sets at small intimate venues and large scale festivals., having supported the likes of Chic and Chaka Khan.

Formed in 1996 by Chris Todd (aka Hot Toddy) and Jim Baron (aka Ron Basejam), Crazy P originated in Nottingham, where the pair went to university and reshaped old records from different musical genres. Attracting the attention of the Manchester deep house label Paper Recordings, the duo released their debut album “The Way We Swing” in 1997, followed by “A Nice Hot Bath With” in 1999 and shortly after, they met lead singer and front-woman, Danielle Moore.

Releasing several albums with Danielle Moore, including “The Wicked Is Music”, “24 Hour Psychedelic” and “A Night on Earth”, Crazy P recruited two more members, bassit Tim David and percussionist Mav Kendricks One of their most successful albums, "Stop Space Return", was released in 2008 on the house label 20:20 vision. Since then Crazy P have become a widely acclaimed group in the British electronic music scene, releasing "When We live" in 2012 and also many successful remixes often under the name of Hot Toddy.