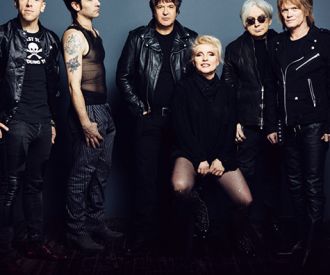 Having sold over 40 million albums worldwide, Blondie, who are at the intersection between new-wave and punk, are renowned for their timeless hits including One Way or Another and Heart of Glass. Currently consisting of band members Debbie Harry, Chris Stein, Clem Burke, Leigh Foxx, Matt Katz-Bohen and Tommy Kessler, Blondie have been inducted into Rock and Roll Hall of Fame and have filled arenas across the world for over thirty years!

After forming in New York in 1976, Blondie released a self-titled album. In 1978, Blondie exploded into the UK music scene and released Plastic Letters, which included the hit Denis and the album reached  #10 in the UK album chart. In the same year, a pivotal year for Blondie's success, the band released Parallel Lines which not only hit #1 in the UK album chart but made it into the #6 in the Billboard Hot 200 in the US.

Blondie then went onto release several other albums, including Eat To the Beat in 1980, which contained the hit single Atomic as well as their fifth album, Autoamerican, which included the smash hit Tide is High. Following the release of their sixth album, Hunter, Chris Stein became extremely ill and the band disbanded in 1982. Finally reforming as a quartet, Blondie have released several more critically acclaimed studio albums and retained their reputation of a world-class punk and new-wave band!

In November 2021, Blondie is embarking on a widespread UK tour and visiting the country in which it has enjoyed the most success. Renowned for their energetic and kooky live performances, seeing Blondie perform on stage is a once-in-a-lifetime experience. Grab your tickets now to experience one of the most timeless and iconic punk/new-wave bands live in concert!

What are Blondie’s biggest hits?

What are Blondie’s albums?

Who are the band members in Blondie?

When did Blondie form?


Blondie formed in 1976 and then released their self-titled album.

Where did Blondie form?


Blondie formed in New York, where most of the band are originally from.


What genre of music are Blondie?


Blondie are categorised as new wave and punk.

When did Blondie break up?


Blondie broke up in 1982 but then reformed again as a quartet.

Who is the lead singer of Blondie?

Debbie Harry is the lead singer of Blondie.