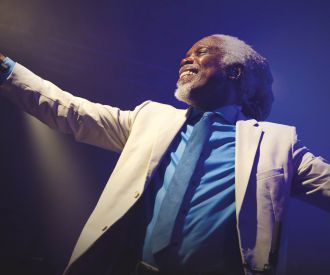 Billy Ocean exploded into the UK music scene with his groundbreaking album Suddenly, which features smash-hits Caribbean Queen and Loverboy. Leading an astonishingly successful career, Billy Ocean has sold over 30 million records, hit number one in the charts many times and received multiple Gold and Platinum records worldwide. In 1985, Billy Ocean won a Grammy for best RnB artist and in 1987 he was nominated for a Brit award for best male artist.

What are Billy Ocean’s top songs?

Billy Ocean’s top songs are “Caribbean Queen”, “When The Going Gets Tough, The Tough Gets Going”, “Suddenly”, “Lover Boy”, “There’ll Be Sad Songs”, “Get Outta My Dreams, Get Into My Car”, “Love is Forever”, “Love Zone”, “The Colour Of Love”, “Mystery Lady”, “Love Really Hurts Without You”, “Licence to Chill”.

What is Billy Ocean’s number one hit?

Billy Ocean's number one hit is Caribbean Queen (No More Love On the Run).

What are Billy Ocean’s top albums?

What awards has Billy Ocean won?

Billy Ocean has won a Grammy for best RnB artist (1985), American Music Award for Favourite Pop/Rock (1987) and has also been nominated for a BRIT award for Best Male Artist. In 2010, Ocean was presented with the Lifetime Achievement Award at the MOBO Awards.

What style of music does Billy Ocean play?

Billy Ocean’s style is rooted in reggae, pop and RnB.

Where is Billy Ocean from?

Billy Ocean was originally born in Fyzabad, Trinidad and Tobago and then moved to Romford, London where he grew up.

When did Billy Ocean begin his music career?

How many times has Billy Ocean been in the UK Top 40s?

Billy Ocean - When the Going Gets Tough, the Tough Get Going (Official Video)