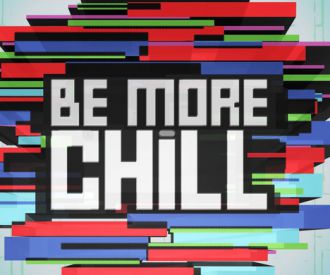 Tickets for Be More Chill

The wait is over… smash hit musical Be More Chill is transferring across the pond and making its West End debut in spring 2020! After storming Broadway and evolving into an international cult phenomenon, Be More Chill is undoubtedly one of the most exciting things that has happened to London theatre scene this year!

Directed by Stephen Brackett and boasting a tony award-nominated winning original musical score, Be More Chill is a unique, electrifying musical experience like no other. Come and see what the fuss is all about and grab your tickets today!

Like many classic teenage love stories, young and nerdy teenager Jeremy will give anything to improve his high school social status and date his longtime crush, Christina Cangilda. However, Be More Chill involves an interesting Sci-Fi twist: Jeremy makes a questionable pact with SQUIP- a supercomputer processor which is set on taking over the world.

While SQUIP certainly helps improve his social standing at high school, as it instructs him on how to dress, act and talk, he learns that this deal comes at a cost and that being himself perhaps isn’t the worst thing after all…
See more

The Other Palace Theatre

Tube: the nearest tube stations are Victoria, District, Circle. The theatre is a 2-5 minute walk away

Train: Victoria train station is about a 5 minute walk from the theatre.

Car: Given that the theatre is close to Buckingham palace, roads are generally closed. However, you can find some parking meters in nearby streets which are operated by phones. There is a multi-story car park about 15 minutes walk away from the theatre. However, please be aware that the Other Palace is not part of the Q park scheme and is in the London congestion zone.

You can book access and personal assistance tickets in person, at the box office desk is in the foyer, where there is step-free access via the main entrance. Or you can contact the theatre by email access@theotherpalace.co.uk or by phone 020 7087 7966

The Other Palace’s main entrance provides full level access and there is also an accessible foyer and bar. Staff are on hand to assist any customers with access requirements.

Getting to the Other Palace

Staff are happy to drive Customers with access requirements to the main entrance and the theatre is then easily accessible through automatic doors. Blue Badge holders can park in an area to the right of the Other Palace theatre on Palace street.

There is step free access at Victoria tube station and The Cardinal Place exit of Victoria is only approximately 350 metres from the main entrance of the theatre.

There are wheelchair park spaces in Row N and the theatre has level access. If you are sat in an aisle seat, access requires at least one step.

There is an Infra-Red audio enhancement system in the theatre and headsets. There are also hearing aid loops but these should be requested from a member of Front of House staff when you first arrive.

The Other Palace has two accessible toilets. You can find one in the foyer area and the other outside the entrance to the studio which can be accessed step-free via the lift.

There are also some more standard toilets located in the foyer area which is on the Ground floor. Both of these toilets have completely step-free access.

Staff are on hand to take bar orders for any customers with access requirements.

There are also bars such as the other gin palace, the studio bar and the other naughty piglet. If you need help accessing these bars, please speak to a member of staff.

Assistance dogs are welcome and staff will happily look after them.

Ticket prices for Be More Chill range from  £23.40 to £102.00. The Other Palace Theatre is one auditorium however the prices of seats range greatly. If you are looking for the best seats in the house then these can be found directly in front of the stage, only a few rows back.

If you are looking for better value tickets, we recommend that you look for tickets which are at the back of the auditorium or to the sides of the theatre. Alternatively, there are some slightly cheaper tickets right in front of the stage.

Originally a Broadway production, Be More Chill now also has a London production. The Big Chill London cast is:

What is Be More Chill the Musical about?

Be More Chill the Musical is about a young, geeky teenager who makes a pact with a Super Computer Processor (SQUIP) so that he can get the hottest girl in school, and his long term crush, Christina Cangilda. Although SQUIP allows him to climb the social food chain in highschool, his pact unfortunately comes at a cost.

Who is in the Be More Chill the Musical cast?

How long is Be More Chill the Musical?

Be More Chill the Musical is 2 hours 30 minutes long.

What songs are in Be More Chill the Musical?

Who plays Michael in Be More Chill the Musical?

Where is Be More Chill the Musical playing in London?

Be More Chill the Musical is playing at the Other Palace Studio in London.

Who wrote Be More Chill the Musical?

Is Be More Chill the Musical going on tour?

Be More Chill the Musical is not going on a UK tour and visiting the cities of Manchester, Birmingham, Bristol, Liverpool and Edinburgh.

Who directed Be More Chill the Musical?

Be More Chill the Musical was directed by Stephen Brackett.

When did Be More Chill the Musical first premiere?

Be More Chill the Musical first premiered on the 30th May 2015 at the Two River Theatre in New Jersey.

Photos of Be More Chill

Be More Chill
+ info
Several locations
No events
-
Follow
Why?

Prior events Be More Chill