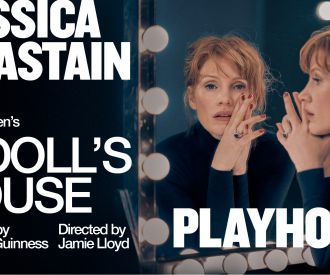 Tickets for A Doll's House

Written by Frank McGuiness and directed by Jamie Lloyd, A Doll’s House boasts a star-studded creative team. As the third and final show in the Jamie Lloyd Company’s Playhouse Season, after directing Cyrano de Bergerac and the Seagull, theatre tickets are expected to be in extremely high demand so book them now to avoid disappointment!

Wife to a successful husband and mother of three children living in a beautiful house, Nora (Jessica Chastain) seems to lead the perfect life on the surface. However, Nora is not satisfied with her lack of power as a housewife and how her role is conceived as seemingly frivolous.

In order to save her husband's life, Nora secretly takes out a loan, which leads to conflict with her husband. Determined to establish her independence, Nora challenges her gender role and the status quo....

A Doll’s House ticket prices range from £15 to £218.75 depending on where you sit in the theatre. The Playhouse theatre has a capacity of 786 seats and is divided across the Stalls, the Dress Circle and the Upper Circle.

If you are looking for premium seats, then these can be found in the middle of the Stalls directly opposite the stage. There are also excellent seats in the centre of the Dress Circle which provide incredible views of the stage.

The cheapest tickets in the Playhouse Theatre can be found in the Upper Circle, which is the section of the theatre furthest away from the stage and therefore has restricted viewing. There are also more discounted tickets to the rear of the Dress Circle.

The Playhouse Theatre is accessible by both public transport and car, however, please be aware that the theatre is in the London Congestion Charge zone. Here is the Royal Avenue Theatre address:

Tube: if you are planning on taking the tube, then the nearest tube station is embankment (District, Circle, Northern and Bakerloo). Charing Cross tube station is also only a 5 minute walk away.

Train:Charing Cross station is only a 5 minute walk away.

Car: the closest car parks, which are part of the Q Park scheme, are Chinatown and Trafalgar Square. The Q Park scheme gives you 50% off parking costs when staff validate the parking ticket. These car parks are a 10 to 15 minute walk from the theatre.

Getting to the Playhouse Theatre

The theatre’s main foyer is located on Northumberland Avenue. There are three steps up from street level through double doors. There is also a temporary ramp which can be used if needed.

The Playhouse theatre has no customer lift and most sections have to be accessed by stairs. However, the Stalls section of the theatre are step-free from the foyer to the seating area.

Staff are on-hand to help customers with access requirements navigate the theatre and also help with the temporary ramp. For customers who cannot access the bars, staff are happy to provide an at-seat service .

A Doll’s House will be showing at the Playhouse Theatre from Wednesday 10th June- Saturday 5th September.

Select Thursdays in July and August at 14:30

Photos of A Doll's House

A Doll's House
+ info
Several locations
No events
-
Follow
Why?