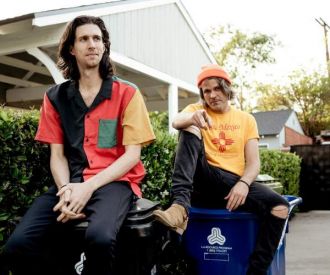 Known worldwide for their global smash hits such as “Don’t Trust Me”, “STARSTRUKKK (Feat.Katy Perry), and “My First Kiss (Feat.Kesha), 3Oh!3 have garnered international acclaim with their high-energy smash hits and have sold out arenas around the world! Consisting of duo members Sean Foreman and Nathaniel Matte, 3o!3’s unique, dynamic sound!

Originally from the foothills of Boulder, 3Oh!3 was formed in 2004 and named after the 303 area code that had included the whole state of Colorado and now only serves the Denver metropolitan area and Boulder. In 2007, they released their debut self-titled album “Electroshock” and then went on to join Photo Finish Records. The release of their second album, Want (2008), led to their international recognition with "Don’t Trust Me" reaching number seven on the Billboard Hot 100.

Since then, 3OH!3 have gone onto release several other highly successful singles and albums, including Streets of Gold (2010), Omens (2013) and Night Sports (2015) which have all been received with international acclaim. Catch them live in concert!

To support their most recent album Need which they have released in 2021, 3Oh!3 have announced an extensive tour. While their tour was originally cancelled due to the coronavirus pandemic an the studio album was also postponed, new events have been scheduled. However, please note that these events could be subject to change!

What are 3Oh!3's biggest hits?

3Oh!3 had scheduled a tour in 2021 but these dates are subject to change due to the Coronavirus pandemic.

3Oh!3 are originally from Boulder, Colorado.

What genre of music are 3Oh!3?

3Oh!3 are rooted in electro pop, electro synth and rock.

What does the name 3Oh!3 mean?

3Oh!3 is named after the 303 area code that had included the whole state of Colorado and now only serves the Denver metropolitan area and Boulder.